Adventures in the Post-Apocalypse: Kamandi: The Last Boy on Earth 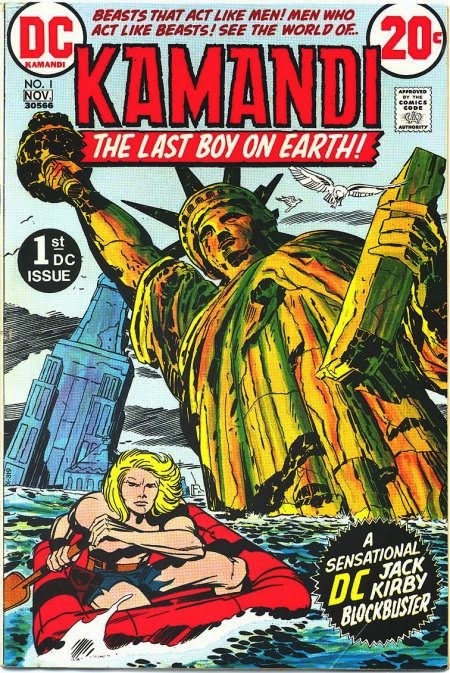 Jack Kirby created Kamandi in the early Seventies, when he hopped over from Marvel to DC. The comic follows a young boy who was raised in an underground bunker, Command-D (from which 'Kaman-di' gets his name). When the bunker is destroyed, he’s thrown out into a wild, post-apocalyptic world filled with gibbering monsters and animal peoples. There are rat-men, ape-men, lion-men, tiger-men, alligator-men, bear-men, leopard-men, nuclear-men, and you get the general idea.

This isn’t The Road.

Rather than being a barren, lifeless wasteland, the post-mystery-disaster world is a fertile playground, ripe for adventure.

Which, of course, is the point.

The post-apocalypse can be divided up into two types: bleak and adult, and fun and juvenile. Kamandi is the latter. This is a comic a ten year old boy would love.

The book has a standardized format that never varies. Each issue broken into four chapters. The title and credit page is always followed by a double spread, typically a lavishly illustrated post-apocalyptic landscape with the Statue of Liberty stuck in somewhere.


Planet of the Apes was an obvious influence. Kirby takes the film as a starting point and then runs with it, and doesn't stop. The live action Ape film was grounded by a limited production budget; there was only so much they could pull off convincingly. Kirby’s imagination, by contrast, is free of such limitations, and he lets it loose.

The disaster behind this post-apoclayptic trope fest is described by Kirby as ‘a natural disaster linked with radiation’, but it really doesn’t matter what caused it all.

It could have been a dirty telephone.

The result? Humans, of course, have been left mental midgets, reduced to the status of cattle. Animals have evolved into dozens of sentient species. And yet, legacy vehicles and devices are everywhere, and still work. Nevermind how long it would take for lions (and just about every other large mammal) to evolve into intelligent humanoids, complete with a distinctive fashion sense and accompanying civilization. If that kind of selective aging bothers you, you’d best back away from the book slowly before your brain explodes.

The post-apocalypse is the most fun with Variable Decay. Our inner ten year old wants cool mutants loitering about recognizable landmarks, after all, and Kirby doesn't disappoint. He serves some up every issue.

Kirby doesn’t let little things like science or facts get in his way.  He'll explain things away with little snippets: animal evolution, for example, was accelerated by a drug called Cortexin. 'All we have to do is add a line of dialogue…' 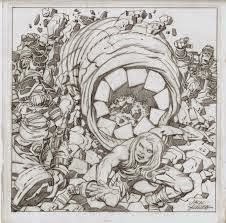 In one of Kamandi’s first adventures, he comes across tiger lancers fighting leopard-men. Beause why not? It’s not his fight, but he intervenes anyway, shooting a leopard sniper, and in doing so, saving tiger team leader.

The tigers capture him, beginning a long tradition. Kamandi is going to spend a lot of time getting captured. But the grateful tiger leader and Kamandi become fast friends.

He's done up like a competitor in The Hunger Games and brought to watch the tigers worship their god, an ICBM. Echoes of Beneath Planet of the Apes. The nuke is minded by Dr. Canus, a super intelligent dog like Mr. Peabody, only less snarky. Canus has to stop Kamandi from detonating the nuke, bored-Charlton Heston / Taylor style.

For some reason the dog is intrigued by this suicidal talking human, and saves him from certain death. Once mans best friend…

Canus goes on to introduce Kamandi to Ben Boxer, a mutant human who’s ‘a natural atomic-pile’ and able to make himself invulnerable using his ‘cyclo-heart’. Yep: scientific bafflegab is thrown around to justify all sorts of cool, batty stuff.

Kirby created a couple of maps of his new earth, and you can follow Kamandi’s adventures across them. The Tiger Empire rules the eastern seaboard, although Rat-men control the half-submerged ruins of New York. Gorilla communes dominate Texas, lions rule California, and devils dominate Canada, except Quebec, where human herds run free through verdant forests. Why? Because the other monsters and humanoid animals never learned to speak french.

Such is the power of Language Laws!

Nuclear powered people! When these guys tap their chest, they turn silvery and invulnerable.

I want me a cyclo-heart.

Sadly, when they finally reach their destination, they discover to their (inevitable) horror, it is ruled with an iron grip by a giant brained midget: The Misfit. 'A pumpkin-headed toad’ is how Kamandi describes him, within earshot, which probably doesn’t endear Kamandi to the little fellow.

Never piss off a giant brained midget in charge of nuclear powered people! As fast as you can blink, Misfit enslaves Kamandi and rides him about Master-Blaster style (if you remember Mad Max III: Beyond Thunderdome), just to let Kamandi know who’s boss, then shows Kamandi Mr. Morticoccus, The Ultimate Germ. Tracking Site must keep Morti contained if life on earth is to continue.

You just know what is going to happen.

The first collection of Kamandi ends with the battle for Tracking Site City, with the fate of the post-world at stake. One good apocalypse deserves another.

The issues are filled with fights, chases, Kamandi getting captured, daring escapes and lots of punching.

The endless ‘manimals’ come across as just silly. Too much of a good thing, too quickly. Creative overload can be a problem for someone as imaginative as Kirby.

The series can also be repetitive, but this is a problem with every comic from the Seventies: all of them reiterate their premise on an issue by issue basis, a necessary evil to bring newcomers up to speed pre-internet. When issues are read over a period of several months, or years, it’s not noticeable. When the comics are read all in one go, as a collection, it becomes annoying.

Nevertheless, the scope of imagination on display is impressive. It can be seen as derivative but I prefer to look at it as building on previous efforts, combining tropes into an entirely new thing.

Lucas for example built Star Wars atop Flash Gordon, which he couldn't get the rights to. Same thing here.

In fact, the genesis point for Kamandi was actually a short story called The Last Enemy, which he did before Planet of the Apes came out. Zing!

As far as the post-apocalypse goes, Kamandi is one of the wildest and most fun out there. It would inspire other franchises, such as Thundarr the Barbarian, a children's TV show which Kirby also worked on. Series creator Steve Gerber, better known for creating Howard the Duck, brought him in because he had great taste.

Kirby both wrote and drew the Kamandi series all the way up to issue 37. From 38 to 40, he only drew it. Then he passed it on to others, and there my interest wanes.