Season Five ended on a high. At the top of a cliff. Or rather dangling from one.

It's all about revenge.

Brienne finally had hers: she executes 'King' Stannis to avenge the death of Renly Baratheon, whom she was sworn to protect. It restores her personal honor and lets poor Renly rest easy.


At the same time, her revenge drove her to kill the one man capable (supposedly) of saving the world. So there is, or was, a potential, possible down side. A world destroying biggie of a down side, really, had the prophecy not been bogus. And she missed out on saving Sansa, which was more important, as Stannis would have just frozen to death anyway.

Fortunately Sansa's got agency of her own.

I must admit I thought Stannis' final fall would be dragged out over a few more episodes, during which he'd become increasingly disillusioned and demented before being ignominiously decapitated.

But like Stannis, the show runners felt the need to keep… pushing… forward.

His end resolves the moral dilemma presented by the prophecy promoted by Melisandra, that Stannis, being the one true king, was the only one who could save the world from the White Walkers, and because of that, human sacrifice was justified.

That meant the 'good guys' who were going to save the world were justified in burning heretics alive and sacrificing little kids. After all, magic worked. It wasn't just loony superstition. In Martin's fantasy world, the Carthaginians would have been right to burn kids alive to guarantee victory over Rome.

Except it doesn't work.

Not in the real world, and apparently not in the fantasy world either.

If it did, well, again, there's the moral dilemma. What lessons do you draw from a show that endorses human sacrifice? Sure, it's a fantasy world, but part of the reason we tell stories is to illustrate how to live a good life.

We learn from stories.

Having Stannis victorious after sacrificing Shireen, indeed, BECAUSE of sacrificing her, would be rather problematic, even for a cable show. People would go, 'ew'.

Even within the fantasy world, the burning seems to have freaked out his sell swords, who deserted Stannis, taking all the horses. Realization finally hits Mel in the face: this guy is a loser. She quickly abandoned ship, leaving Stannis to lead his soldiers to their inevitable deaths.

A colossal waste of manpower and lives.

Stannis' final battle was utterly pointless, an exercise in form, a front. Good manners. Doing his duty mattered more than the life of his daughter, his soldiers, or even his own.

It is possible Stannis is still alive, of course, as the final blow was not shown. Why she'd refrain from killing him I don't know, given how she'd sworn on her honor to do so, but it would serve as a nice opposite to Arya's indulgence in sadism. Martin likes to juxtapose things, both themes and characters, so having one chose the higher path while the other takes the low road would make sense. Think Varys vs. Littlefinger, Cersei vs. Ned, Thorne vs. Jon, Mel vs. Onion, and Slave Owner Dude vs. Danny.

I'm just not sure it would make sense for Brienne in this situation.

So the new question is: where does Melisandra go from here? It's now evident that Stannis' death, perhaps his whole journey, is a learning point for her. It may instigate character growth. That or she's soon for the grave as well.

She's the one who pushed Stannis to burn people alive. She promised he'd win the throne.

And she was dead wrong.

It says something about the nature of magic in the World of Westeros. Spells may work, but prophecies are still written by lawyers. What you think you're getting is not what you really get.

What was the fine print at the bottom of all her fire visions? Was she simply so blinded by her own biases, her own faith in Stannis, that she ignored her god's message? Or is her god wrong? Is she a false prophet?

Where Stannis was always riven by doubt, she was certain. Now, she's been shaken.

I suspect that we'll see her team up now with Jon Snow. As a priestess, she can bring people back from the dead, and she needs that hero to save the world.

But if she does, she may find that Jon Snow is not as willing to compromise his morals when it comes to burning people alive.

Martin has to be given a lot of credit for zigging when people think he'll zag. Just when we think a story line will be wrapped up with a nice moral bow, he reverses, has the 'hero' beheaded, and the world thrown into chaos.

He does this just enough that, honestly, I don't feel I can predict which way things in the show will go. I knew Stannis would come to a dark end, but given all the prophecy stuff, thought he'd be at least around to meet the White Walkers. Of all the leaders in Westeros, he's the only one taking the threat seriously. Or even really aware of it. 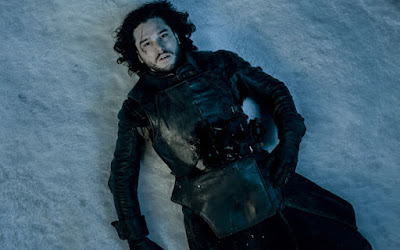 The death of Jon Snow, betrayed by the short sighted Night's Watch, was a real jab to the heart. He was our leading man in the North, our young Santa Claus, the action man capable of fighting off the Walkers and Wights. His death leaves too big a hole in the show, and as such, I suspect he'll be back, either Berric Dondarian style, or like The Mountain. I suspect more like Berric, as The Mountain looks like he's pretty gross under that helmet, and it would dash Jon's sex appeal.

But the Night's Watch have really hobbled themselves with this one. Jon was a good leader, and he'd brought in the Wildlings to help resist the Walkers. Even killed one. Who will be liaison now between the two groups? Who can get them to cooperate, who isn't dead? To fulfill their anger, to sate their hate, they've slit their own throats.

That's the price of their revenge.

I'm not too concerned: Jon Snow will be back.

When Jamie and his neice/daughter left Dorne, you knew the instant she was given a kiss on the lips that she was doomed. Poisoned. I'd have thought they'd turn the ship around straight away for the antidote. You'd think the young prince would keep some on himself at all times, given how obsessed these Dorne nobles are with poisoning people. They seem to do it all the time, for kicks. They probably poison their sibling's birthday cakes, then give the antidote as a present.

You know, for fun.

As it is, the young prince is likely headed off into captivity, as a hostage for the Lannisters.

So her revenge will beget further revenge, and two nations will be plunged into war, just when everyone has to unite to oppose the Walkers, all because people are so consumed with anger and hate they can't see past it.

How ruinous revenge often is.

Arya's revenge upon Meryn Trant was initially satisfying, given he was a real monster, but as it went on, it became uglier and uglier. There's something dehumanizing about it, and how far Arya was willing to go. Not good for the soul to embrace hate so close. Still, you can entirely understand why she did it, that she had very good reasons for doing so, and that his death was deserved, even if the manner of it was, well, pretty horrible.

It was the way Joffrey deserved to go.

Be careful what you wish for. When we finally got a harsh punishment for a nasty piece of work, it has a vile after taste.

I suspect Arya will be descending into even darker places unless her blindness and the belief her actions almost got Jaqen killed brings her back from the brink. She's got more lessons to learn. 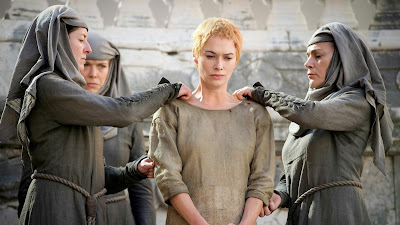 Cersei's walk of shame is undoubtably going to lead to a great big orgiastic feast of revenge. At least, I expect her to make a damn good try of it. She's going to be out for the High Sparrow's head, along with half the city. Especially with her undead Mountain as enforcer. I don't expect Tommen to survive it all. That hapless, sweet little kid isn't long for this world, thanks largely to the machinations of his mother. Cersei's flaws, one way or another, will be the cause of his death. Will she recognize the irony? Probably not.

Was her walk of shame the god's revenge for her impious actions? Can her punishment even be described as revenge, or should it be seen as medieval justice? Karma? Where do you draw the line?

At Winterfell, Theon/Reek grows some virtual balls and saves Sansa from that nasty little stable girl, Myranda, who wants revenge upon Sansa for muscling in on her hawt sadomasochistic Ramsay action. She goes spinning over the rail and meets swift justice at the hands of a paving stone.

Then Sansa and Reek are off jumping into snow banks. I hope there's nothing sharp under all that fluffy white stuff.

It's one of the wheels that keeps Westeros spinning.

As much fun as it is hating the guy, I hope he meets Mr. Paving Stone soon.

Now it's back to the post-apocalypse, at least until next year.
Posted by Gene B at 8:07 AM