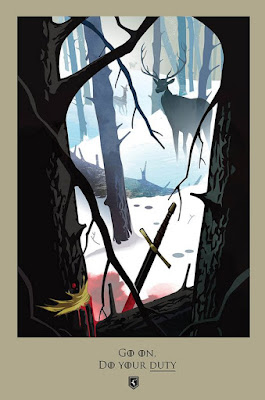 They cut away just before the blow lands.

But there's blood on the tree in the image above, and it's official art for the series.

Since there was no blood on Brienne's sword before she struck, well… it's either highly disingenuous or Robert's last brother is currently sans head.

There's also this interview with the director of the episode, David Nutter, in the WSJ:

The scene between Stannis and Brienne ends with Brienne chopping at him with her sword. Why did you not show the actual moment of Stannis’s death, whereas you guys always show characters getting it so definitively?

I think there was a real sense of inevitability toward what was going to happen, and I think anything beyond that would have been somewhat gratuitous. I know for us to say that about “Game of Thrones,” that’s an interesting way to put it, but you could really get a sense that Stannis knew that his time had come, and there was nothing else really to say, nothing else really to do. I always believe that editing is the kind of thing where you want to cut into a scene a little bit after it starts and get out before it ends. This is exactly what we did in this sequence, and I thought it worked perfectly.

Did you actually film any kind of violence toward Stannis, her sword going into him?


Not at all. It wasn’t even filmed for safety. Dave and Dan were very clear with how they wanted the scene dealt with and handled, and I was there to provide that for them.