Bold and Beautiful Post-Apocalypse: The 100 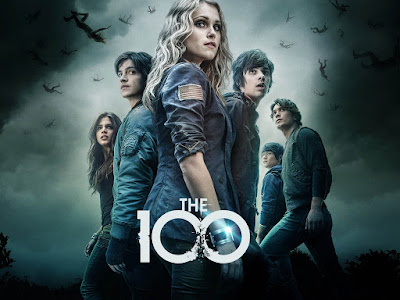 I didn't expect to get hooked by a CW show. When the program was first mentioned to me, I thought it sounded like a post-apocalyptic 90210 (Or whatever constitutes teenage melodrama these days. I'm afraid 90210 is long in the tooth now and the actors will be collecting their pensions soon. Sigh. Nobody under 20 will have any idea what I'm talking about… never mind).

The 100 is based on a series of books by Kass Morgan. So what's the premise? Get this:

It is 97 years after the world was destroyed in a devastating nuclear war. Only a small number of human beings are left. They live in an ad hoc space station cobbled together from dozens of smaller habitations that were in orbit when disaster struck. Now they are running out of air and water, and everyone will soon perish unless they get more supplies.

So they decide to send 100 juvenile delinquents down to the earth, unsupervised and in secret, to see if the radiation has abated enough for the world to be repopulated. The teenagers are tagged like gazelle and their life signs are monitored by the adults far above.

The teenagers are given no survival training whatsoever. They're just chucked in and forced to find a way. It's sink or swim.

If that doesn't sound like a setup for a teen show, I don't know what would.

No pre-established hierarchy so teens must fight for dominance? Check.

Teenagers who are smarter and wiser than all the adults put together? Check.

It's tight and transcends the tropes.

Yes, boiling teenage hormones do run amok, but they never quite take centre stage. There are too many rolling death clouds, mutants, subterranean vampires and falling satellites in the way. Sappiness is kept at bay, because this show isn't afraid to get dark. Really, really, little-kid-jabbing-guy-in-neck dark. It doesn't dodge issues or take the easy way out.

You don't get quite what you expect. And I love subverted expectations. Don't you?

The show builds nicely, and is based around seasonal arcs, with what appears to be a larger multi-season story chugging along in the background. It feels coherent and directed. There have been two seasons so far, and both have escalated to thoroughly compelling climaxes. At the very end of each, The 100 throws in a new element to set up the next season. I called the new element for Season Three (yay!), and I'm looking forward to what the writers do with it. Because showrunner Jason Rothenberg knows what he's doing and it'll be awesome.

Tons happens each season, and there is enough resolution to feel satisfying. Some shows just leave you hanging, and offer no resolution whatsoever. Helix, for example, I found particularly bad this way. And Lost. You just get more questions. Game of Thrones, God help me, sometimes feel like mostly filler: characters spend eight episodes traveling, finally meet up for one episode in which all hell breaks lose, and then have a wrap up episode in the aftermath, along with a cigarette. That's an unfair caricature of what is, really, an awesome show, but it doesn't stop me thinking it every now and then. The 100 doles out events in a more even handed manner.

What I have enjoyed most about the program are the endless, devilishly tough choices the characters are forced to make. And believe me, there are some doozies. These poor, post-apocalypse types don't get softballs, like choosing between good and evil, or Coke and battery acid. They're presented with only the choice between evils (okay that probably describes soda options, too), and have to figure out which is the lesser one. There's moral nuance and sophistication to the show that takes it to the next level. Characters you think are slimy bureaucratic swine are redeemed, dashing young heroes fall from grace, goody-two-shoes condemn innocents to death, and wise leaders go batsh*t crazy.

Most of the characters either are obvious archetypes, which is typical for a genre show, but often with a twist, and the program doesn't do with them what you'd expect. Not by a long shot.

Thelonius Jaha turns into something I certainly wasn't expecting, and while I'm not sure if it's entirely consistent with his character, it's interesting. To be fair, he does go through some dreadful things to get there.

John Murphy I expected to be one note and written out right quick, but the writers had other ideas. Same goes for heartthrob Finn Collins (Thomas McDonell), who zigs when you think he's gonna zag.

The emotional connections and conflicts between the characters have been handled extremely well. The relationships build in a manner that feels natural, and the occasional betrayal is set up elegantly enough you can buy it when it happens. This isn't always the case on TV. 12 Monkeys, for example, has a betrayal that I didn't buy into at all.

They all have competing and frequently conflicting interests. Conflict, of course, is where drama comes from, so characters should be designed to clash. Viewpoints are laid out, so when characters do things, you understand (eventually) why. So it makes sense. People often do bad things for good reasons. The show lays out understandable motivations, making it a great example of action from character.

It has 4 way character opposition, where each node has 1 point in common with the next, but none with the primary opposite. That makes for really rich and nuanced conflict, with an ebb and flow as people argue and are pulled towards different nodes.

And as they say, sh*t happens. If you want a program where you feel like the status quo is different at the end of every episode, this is the show. The show kills off its picture-perfect young cast with the wild abandon you'd expect of G.R.R. Martin.

The entire third season of House of Cards would be one or two episodes of The 100.

Eliza Taylor plays Clarke Griffin, a born leader and budding doctor, is the lead character and primary point of connection for the viewers. She's got balls, and is preternaturally wise for one so young. She's always showing up her elders, which is a typical teenage show trope.

But she makes mistakes, and that humanizes her. She may not be terribly compelling personally (which allows greater viewer identification), but the choices she's faced with are.

And she's got great cleavage, too.