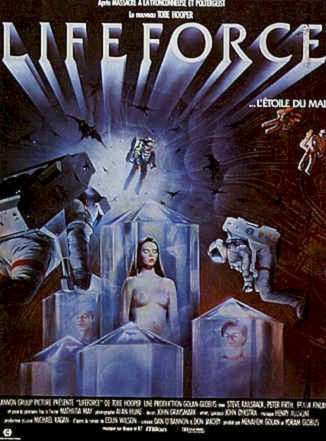 /film has an interesting article about an eighties schlock fest film, Lifeforce (aka Space Vampires, which is actually a more appropriate title).

Lifeforce starts out in the guise of your typical blockbuster, then just gets weirder and weirder. Every time you think they can't get any more batsh*t, they crank it up. It's like someone gave a thirteen-year-old thirty million dollars to make a movie and said, 'Go nuts'.

Or almost never. The result here is so bad it's actually… pretty freaking entertaining. Good film for drinking games and commentary.

There's some rather shocking nudity in it too, for an ostensibly mainstream blockbuster.

But the effects work by John Dykstra (of Star Wars fame) is quite good.

So is the nudity, honestly (definitely not by Dykstra).

It all ends with London blowing up and a 'shocking' twist you don't really care about because every bubble of disbelief has already been long popped.

You do get to see pre-Picard Patrick Stewart spew out five gallons of his own blood into the form of a beautiful space vampire babe.