Magnum Thrax and the Amusement Park of Doom: Chapter One 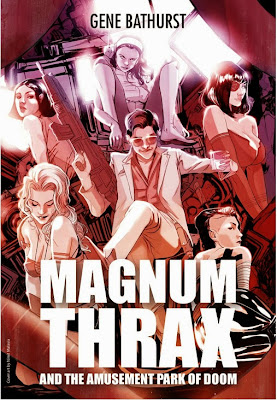 So I've been threatening to post my ebook Magnum Thrax and the Amusement Park of Doom up on The Mighty Internets. Now I'm following through, starting with the prologue.

Only this time it will be followed by chapter one. Or some completely unrelated, random blog post, and then chapter one.

So are you ready for genetically modified tongue-in-cheek butt-kicking sci-fi adventure?

The albino android had lost all hope.

A hole opened in the glowing wall before him and he slipped through into an immaculate white room, his futuristic armour gleaming in the cold light. In the centre of the chamber stood an older but otherwise identical android operating a holographic interface. The younger stepped forward and saluted crisply.

“You’re late, Commander Eight-Oh-Nine,” noted the elder, without looking up. The older android rapidly tapped floating symbols. Four small silver stars were embedded in the collar of his jumpsuit; the logo of the Supreme Sponsor, GenDyn Corporation, was emblazoned over his heart. “Fifty seconds.”

“Apologies, Guru-General One.” Commander Eight-Oh-Nine’s left eye twitched. “The lift systems are down.” He could feel a lump in his throat growing larger, more obscene and loathsome every second. The civilian code patches to his neural net were cracking.

The Guru-General turned towards the far wall. “Transparency,” he said calmly, and waved a hand.

The wall melted away and revealed a scene out of a deranged fantasist’s nightmare, of earthly paradise under siege. Stretching out as as far as the eye could see was an impossible city of elegant, soaring buildings, white and smooth like oversized ceramic jars. Their foundations were engulfed by roiling smoke, out of which rose monstrous tentacles. Glistening with corrosive slime, they writhed about and thrashed at the buildings, tearing off great chunks of material. Entire structures were dragged down, one after another, into billowing darkness.

The Guru-General followed the attack with sharp eyes. He looked at Eight-Oh-Nine: “The Engines of Creation have broken through our defences. Multiple incarnations. Smoke swarm, dragon sharks, and even more efficient variants. I have made… tactical miscalculations.”

Guru-General One had a knack for understatement, thought Eight-Oh-Nine. Always as cool as a quantum computer’s nitrogen tank, for One had truly stable code. Unpatched. Pure. The original engineered neurons still firing inside the vat grown synthe-organ container.

By contrast, Eight-Oh-Nine felt his own emotions yearning to rampage out of control. He wanted to scream, hit things, run around in circles screaming like a lunatic. Like a human. Eight-Oh-Nine could no longer dream of electronic sheep. How did his superior remain so calm? Did the general not know certain death approached?

Outside, dragons with scaly shark heads swooped out of fiery clouds. Bulky gatling guns were strapped to flanks of the hideous hybrid beasts. Each bore a rider: a hunched and shrouded wraith armed with a bulky energy weapon.

The dragon sharks dove at the towers. Sirens strapped to their bellies let out a horrible, blood-curdling wail that terrified those below. Gatling guns belched depleted uranium bullets, raking buildings. The wraiths directed searing beams of plasma at defensive strong points.

In response, jets of blue energy spat out from prickly, anemone like weapons batteries that studded the towers.

A dragon-shark was hit and burst into a rain of unraveling black sand.

Androids in power armour jetted past, unleashing a wave of micro-missiles into a flight of dragon-sharks.

Good, thought the general. Still some sections left. One checked his display, and his expression soured. “Somnolence field at maximum. No effect.”

Eight-Oh-Nine pointed toward tentacles surging upward, like some great spaghetti monster. They formed a tunnel, channeling upward roiling lava. Faces and monstrous shapes tumbled over the burbling surface, only to be subsumed by visages even more horrific, each accompanied by its own tiny, glowing copyright glyph and legal disclaimer.

The display pinged, noting memetic attack. The lava was generating terror-memes powerful enough to freeze those without thought filters. The command chamber was well insulated, but those outside…

A power suit got too close and tumbled out of control into the lava, disintegrating into a puff of smoke.

“It will be close,” said General One. “Twenty seconds.”

There was a tremendous thud as a massive tentacle struck the transparent wall. The room heaved back violently. The two androids compensated easily, but a potted tropical plant slid across the room until the floor merged with it, snapping it in place.

The wriggling tentacle dissolved away into shimmering dust as the building defenses sent a massive electromagnetic pulse through it.

Eight-Oh-Nine swallowed hard and felt his sphincter involuntarily tighten. “It knows, Geshe. Abort!” The Engines of Creation must know what they were trying to do, of that he had no doubt. They’d lose everything. Anxiety ate at his mind. He rubbed tiny prayer beads back and forth between sweaty fingers. “Abort, I beg you!”

Undulating tentacles had piled up, extending the tunnel through which the plasma hurtled, directly towards them. A ruggedly handsome face emerged, twisted by rage and hatred. “Give it to me!” it thundered.

Out of the floor extruded a thin pillar topped by a bulb. It spiraled open like a flower petal, revealing a copper coloured dodecahedron the size of a marble.

One plucked it, severing the pillar’s soft molecular bond, and handed it to Eight-Oh-Nine.

“I am transferring command authority to you, Commander. The rest of your equipment is already in your escape pod. Get to Nike Monastery. Find the prodigy technowitch. She is the world’s only hope now,” said One solemnly. “May Begtse and the Founding Fathers guide you.”

One’s face fell and he rounded on Eight-Oh-Nine.

Eight-Oh-Nine saluted, spun on his heel, and ran at the wall. A hole opened up. He dove through, and it snapped shut after him.

As One watched Eight-Oh-Nine exit, a wave of relief flooded over him. His job was done. “May all beings be happy,” he said, clasping his hands together. “God save America.”

With a deafening roar the wall gave way. Living lava poured in, instantly vaporizing the general.

Moments later a small white pod soared up into the sky out of the tenebrous maelstrom. Tentacles whipped and snapped after it, but they were too slow, too clumsy. The pod arced into the stratosphere before beginning a slow, leisurely descent.

Inside, Eight-Oh-Nine breathed a sigh of relief. Perhaps there was reason for hope after all.

Eight-Oh-Nine took a deep breath and began to meditate.

To be continued next Monday, same punk-time, same punk-channel...
Posted by Gene B at 6:58 AM