Interested in Classic Doctor Who? Here's what to watch, and what to avoid…

Doctor Who is one of the oddest programs out there. Seriously: it's about an eccentric, two-hearted alien who travels around time and space in a blue police box, generally accompanied by a foxy young lady, fighting monsters and saving the universe with a sonic screwdriver that can do almost anything.

Did I mention he's over 900 years old and dates teenagers?

The concept has been flexible enough to keep the program going for over fifty years, albeit with a dead zone in the nineties, when books and fanfic kept it alive.

Doctor Who has always varied wildly in quality. It's like a manic depressive TV show, and to be perfectly honest, of the original series, there's really only four seasons that are superb. The rest? Mostly unwatchable. But that's part of the program's genius, because there are people out there who feel the exact opposite I do: they laud the dreadful seasons and hate the really good ones.

I put it down to the slow collapse of human civilization into barbarism and poor taste.

The program lives by the maxim 'get them when they're young' and I'm a case in point. I have vague memories of watching Jon Pertwee episodes, but not understanding what was going on. I was too little. I just knew that it was crazy scary stuff unlike anything else.

If you're thinking of getting into the show, however, you have to ask yourself a question: Do you have trouble accepting lame special effects? Not-so-special effects, that is, often done live, at time of broadcast?

If so, your trip through Classic Who will be a short one. Of the core set of episodes, you'd best stick with just four (and even these have dodgy bits):

Because there are no good effects in Classic Doctor Who, just absent ones.

But if you like lots of cardboard in your sci-fi, well then, you've hit the jackpot, my friend!

Much of the show was filmed in a BBC closet using janitorial gear. That's an advantage: you get to watch serious, Shakespearean-trained actors emote to a bucket. Or bubble wrap. And they make it work.

Is that not the most awesome display of dedication to craft imaginable?

So for the curious and the eccentric, here's my nostalgia-heavy, second-childhood guide to enjoying Classic Doctor Who: 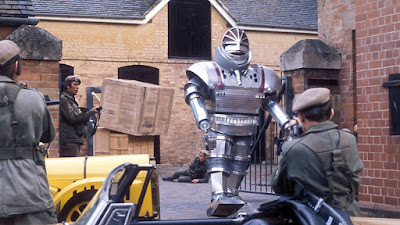 Short and sweet. The initial list covers just a (baker's) dozen stories, almost all of them from the gothic-horror era (as much as a children's show can do gothic-horror… you'll be surprised):

The Time Warrior
Story: The Doctor, with the help of a feisty young female reporter, must stop a time traveling alien from abducting human scientists into the past. Rather clever really.

Why watch it?: Humpty Dumpty as an alien. The villainous tag team of Irongron and Lynx is like an evil odd-couple. Seriously, they could have had their own TV sitcom. Also, Sarah Jane Smith's debut on the program. Everywhere she goes, she foments revolution within the first couple of episodes. Just how she rolls. Jon Pertwee's more of an action-Jackson Doctor, and puts his Venusian karate to good use. You'll never see another kung-fu action Doctor after his tenure…

Robot
Story: King Kong, basically, only with a robot and a bunch of Fascist robotocists. Over this backdrop, The Doctor regenerates into Tom Baker.

Dodgy SFX: The robot.  Especially when he grows to giant size.

Why watch it?: Tom Baker's performance. You can't take your eyes off him. He imbues his performance with electric eccentricity, and flips from comedy to deadly seriousness in the blink of an eye. And you'll be introduced to recurring characters such as The Brigadier, Harry Sullivan and the original UNIT crew. The program at its most grounded.


The Ark in Space
Story: Cryogenically frozen humans of a long destroyed earth find themselves being used as incubators for an invasive alien species aboard a space station. Sounds familiar, no?

Why watch it?: The bubble wrap. And the space station. It's what passes for hard-core seventies sci-fi. The first episode is mysterious and quiet in a way most programs wouldn't dare even try today. The sets are superb though, as far as this show usually goes. Doctor Who has the props, effects, and sets of a stage play, generally speaking.


Genesis of the Daleks
Story: The Doctor is sent back in time to stop the development of the Daleks, his deadliest plunger-armed enemy.

Why watch it?: Davros. Michael Wisher's performance is one of the best in the entire series, and he's every bit a match for Tom Baker. They have a relatively sophisticated debate about ethics, too. Parallels to the Nazis are pretty on the nose (Nyder even wears a Knight's Cross), but it's well done, and incredibly bleak to boot. The Daleks themselves… they're one note. Great design, but they never change, never evolve. That's why they need a Davros. Someone or thing with more dimension.


Terror of the Zygons
Story: Something horrific is stalking oil rigs and dragging them down into the sea…

Dodgy SFX: The Loch Ness Monster is a hand puppet.

Why watch it?: For everything else. The Zygon alien design is a wonderful cross between a fetus and an octopus. The episode has a wonderfully creepy atmosphere and great Scottish bit players.


Pyramids of Mars
Story: Sutekh the Destroyer, Egyptian god, is about to escape his prison on Mars and destroy the universe, and the only thing in his way is… oh, you know who: The Doctor. Hmm. Egyptian gods as aliens? Sounds familiar in a decade or two…

Why watch it?: Sutekh is supreme! Pre-Stargate Doctor Who does Hammer Films. The fellow who plays Set, or Sutekh, is superb, despite being immobile for much of the story; he imbues his character with nuanced menace using only his superbly modulated voice.

The Seeds of Doom
Story: The Thing meets The Doctor. Only I mean the vegetable-carrot Thing, not the shape shifting one. And this vegetable grows much, MUCH bigger. I'm talking King Kong big. Best of all, people get fed into a plant-mulcher, Fargo style. Did I mention this was a kids show?

Why watch it?: The plant creature. And Harrison Chase, the eccentric millionaire, who's an equally fun, if completely insane, creation.


The Deadly Assassin
Story: The Doctor returns to Gallifrey, his home world, to deal with a plot to assassinate the president. Of course, he gets framed for it and has to prove his innocence by going in to The Matrix, an artificial reality where memories of Time Lords are stored… which sounds strangely familiar. How odd.

Why watch it?: The Matrix, twenty years early. And you see a lot of Gallifrey, the home planet of the Time Lords. Basically, they're a bunch of pompous. upper-crust, bureaucracy loving Brits. Figures they'd run the universe.


The Face of Evil
Story: The Doctor must fight a rogue AI that has divided the people it rules into two tribes: one savage, the other psychic. It's all easy-breezy until The Doctor realizes he's been here before…

Why watch it?: Leela, the sexy savage companion who's always wanting to kill people. It's her first answer to every problem: 'Shall I kill him, Doctor?'

I love Leela; she's such a perfect contrast to our sophisticated pacifist doctor.

She's the doctor's most unique and different companion, the only one with a polar opposite view point. These days he flies with interchangeable young ladies, with the notable exception of Donna, who, honestly, would give Leela a run for her money. The show has never tried something as daring (or an outfit quite as risque) since.

And Leela would kick Seven of Nine's latex clad butt.

Also in this episode, the Doctor threaten to kill a man with a jelly-baby.


The Robots of Death
Story: The Doctor and Leela arrive aboard a sandminer and must find a killer who's using robots as his weapon of choice.

Why watch it?: It's sci-fi Agatha Christie, and the actors don't seem to realize they're on a kid's show. Still part of the gothic-horror meets 'hard' sci-fi mash-up that typified the Hinchecliffe era.

The design of the robots is really inspired, like Chinese Terracotta Warrior robots.


The Horror of Fang Rock
Story: The Doctor and Leela arrive at a Victorian age light house which is being preyed upon by a monster.

Of course Leela wants to kill them.


The Invasion of Time
Story: The Doctor must return to Gallifrey to assume the Presidency and make way for an alien invasion. Wait, what?

Why watch it?: Baker's mad performance. The plot meanders and the story's overly long, but still lots of fun. Baker's last episode with any dramatic tension. Leela departs at the end. It is sad. No more Janis thorns. But rather a perfunctory departure.

The best companion exit was that of Jo Grant in the story with the giant maggots. They gave me nightmares.

The Caves of Androzani
Story: Drugs, caves and androids.

Dodgy SFX: The dragon beast creature thing. Whatever it is supposed to be.

Why watch it?: The villains, the pacing, the androids. The visceral hatred and revenge theme mixed with deceit and Machiavellian maneuvering. It's dark and hazard filled, which is how I like my Who. Peter Davison goes out on a high. The episode that follows is one of the worst in the history of the program, so stop with this one. You've been warned.

Just over a dozen stories, all but one from between the start of season 11 (1973-74) and the end of season 15 (1977-78). All you need to see of the original to get a grip on the program's conceits: he regenerates, he has a time traveling box, and there are monsters everywhere.

What's that, you say?

If, like Oliver, you want more, proceed on to… Level Two.

I should note that the program reinvents itself, particularly in tone, from time to time. Douglas Adams wrote for the show late in Tom Baker's era, and while I love Hitchhikers, I don't like hitchhikers in my Who. Two different tones, two different franchises. Without dramatic tension (and Adams denuded the show of it), there's just no point to Who. It ain't scary.

The next level of stories… next week.