Quest for an Audience: On editing... 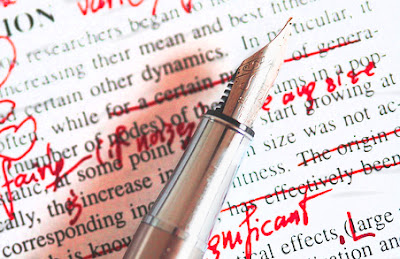 I'm starting to edit a piece, and I've been procrastinating. At least I'm wasting time online researching the topic of editing, so I can claim I'm doing tangential work.

Does anyone else do this?

Found an old Guardian article on editing, and how the role of editor is changing in the book industry:

"For some years now – almost as long as people have been predicting the death of the book – there have been murmurs throughout publishing that books are simply not edited in the way they once were, either on the kind of grand scale that might see the reworking of plot, character or tone, or at the more detailed level that ensures the accuracy of, for example, minute historical or geographical facts. The time and effort afforded to books, it is suggested, has been squeezed by budgetary and staffing constraints, by the shift in contemporary publishing towards the large conglomerates, and by a greater emphasis on sales and marketing campaigns and on the efficient supply of products to a retail environment geared towards selling fewer books in larger quantities.

"Many speak of the trimming of budgets, the increasingly regimented nature of book production and of the pressure on their time, which means they have to undertake detailed and labour-intensive editing work in the margins of their daily schedule rather than at its centre. One freelance editor I talked to remarked that "big companies used to have whole copy-editing and proof-reading departments. Now you'll get one publisher and one editor running a whole imprint." She'd noticed that some editors tended to acquire books that arrived in a more or less complete state."

That jibs with what I've heard. Publishers have less resources, so the closer your work is to being shelf-ready, the better. "In 2005, Blake Morrison wrote a long essay on the subject in which he noted that, despite the inherent fuzziness of the line between facilitating a writer's work, with the occasional firmness and wing-clipping that entails, and the kind of over-editing that can result in a loss of authenticity and spontaneity, editing was vital to the business of writing and publishing. "When a book appears," he concluded, "the author must take the credit. But if editing disappears, as it seems to be doing, there'll be no books worth taking the credit for."

I think that goes too far, but for many of us (such as myself) it would be the case. There are even some very prominent authors, incredibly successful ones, who could do with a more assertive editor. Readers will put up with their superfluous prose because the rest is so good, but that doesn't mean they don't need an editor.

Dean Wesley Smith, who has an awesome website and talks openly about his craft, is a three draft writer, and claims most pros are.

"The old-fashioned editor has to a great extent disappeared, but I'm not too sure that's a great loss; and the improvement in sales, marketing and design effort, in my opinion, more than makes up for it. Editorial work is often farmed out to freelance copy-editors, and not done in-house as it used to be. Have freelance editors got worse? I don't imagine so. Also, was "old-fashioned" editing as great as it is often claimed to be? Moaning about the good old days is as much a part of writing life as drinking too much and a partiality for parties and too much smoking."

Jeanette Winterson, whose work I quite like, chimes as well:

"Editors have become linear and timid. They worry about how things follow and Emma Bovary's eyes both change colour unexpectedly, and no one minds. As Virginia Woolf wrote, "all my facts about lighthouses are wrong". So there is wrong that is right, and that is better than rigid rightness that is wrong. I find, too, that many younger editors simply don't have the cultural resources to recognise a reference or playfulness therein."

A good editor you're simpatico with is worth their weight in gold.

And they'd probably want to edit that sentence.