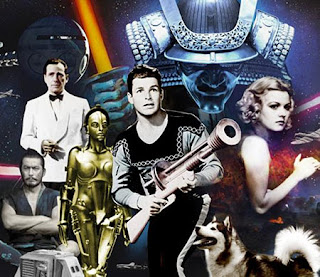 "In fact, Star Wars­­­—the original 1977 film that started it all—is all these things. It’s a pastiche, as mashed-up and hyper-referential as any movie from Quentin Tarantino. It takes the blasters of Flash Gordon and puts them in the low-slung holsters of John Ford’s gunslingers. It takes Kurosawa’s samurai masters and sends them to Rick’s Café Américain from Casablanca. It takes the plot of The Hidden Fortress, pours it into Joseph Campbell’s mythological mold, and tops it all off with the climax from The Dam Busters. Blending the high with the low, all while wearing its influences on its sleeve, Star Wars is pretty much the epitome of a postmodernist film."

I wrote about Star Wars over Empire Strikes Back here, and about the series here:

"The Empire Strikes Back went seriously over budget and threatened to bankrupt Lucas. It was, and is, the least financially successful of all the Star Wars films, pulling in $100 million less than the original. It's the lowest earning of all six. Think about that. Lucas tilted towards the safety of toys and marketing for a reason. It's a stressful business and you can easily lose your shirt (to top it off, Lucas was going through a very expensive divorce at the time). Lucas himself reedited Empire to be action-oriented and appeal more to children, but it didn't work and he abandoned the effort.

By the time Jedi came out, the Irvin Kershner and Lawrence Kasdan tag team was sundered and story was no longer king. Merchandising took story out behind the barn, beaten it up and shoved a toy in every orifice.

Jedi made $50 million more than Empire, and was bolstered further by solid merchandise sales. And if you equate box office with quality, the best film of the whole set is The Phantom Menace, with $1,027,044,677 worldwide.

That's how our wallets voted, at any rate.

Star Wars was the biggest film event of my childhood, and I don't think anything since has shaken up cinema (and merchandising) as much. The Matrix was a seminal film, but was more adult oriented.

When you're under ten, films have a bigger impact.

You've not been filled up with decades of hype and media and tropes and twists and characters being killed only to be revived by the end of the episode, or cynical reboots of major franchises every couple years. Everything is fresh and shiny and new and never seen before when you're young and bright eyed."
Posted by Gene B at 12:06 PM