Chapter 11 of Magnum Thrax and the Amusement Park of Doom

It's that day again. 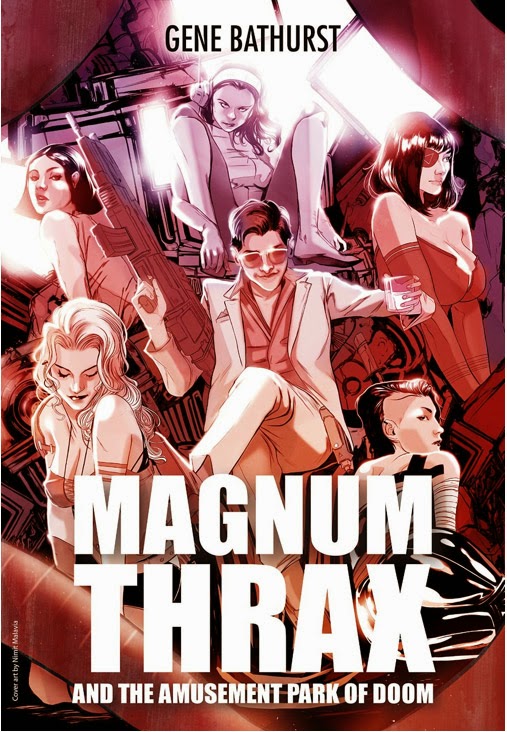 Before a castle of gleaming silver stood the android, in a state of much better health than he’d been in a moment before. The synthetic man strode down towards Thrax. To the right, upon a great pile of gold treasure, lounged a red dragon. It looked down upon them with evil eyes. White wisps of smoke drifted from its flaring nostrils. To the left was a tree village populated by dead eyed elves silently smoking long, thin pipes and eating soft tortilla chips.

“The Land of Wonder,” replied the android calmly. “The Worlds of Tomorrow Entertainment Complex and Amusement Park. Heart of the Engines of Creation, realm of the Dark Lord. The big bad, as it were. Our mutual enemy, Mr. Thrax.”

Thrax looked over the android. “You look better.”

“I am dying,” replied the artificial man with a wan smile. “But then, so are you.”

“Me? Nah. I feel fine,” said Thrax with false bravado.

“You won’t, soon enough” said the android. “The synvirus will dissolve you in seven days time. It will not be a pleasant death.” The android shrugged. “Sorry.”

Thrax punched Eight-Oh-Nine in the face. The android stumbled back, then righted himself, undamaged. He looked at Thrax with pity. “Do you feel better? You may hit me again if you like.”

The dragon laughed, rumbling laughter shaking its elephantine belly and causing vibrations to course through the ground.

“Chance. The general injustice of existence. But there is a way to avoid a horrible fate. A cure.”

“If you infect the Dark Lord, the virus will leave you unharmed. And save the world.” The dragon turned its head like a bird and focused a vast yellow eye on the android.

“Planet’s pretty screwed up as it is,” snorted Thrax. “But I get it. Do or die.”

“Yes. Look,” said Eight-Oh-Nine, gesturing at a man imprisoned in a medieval stock.

Thrax rounded on the android. “What have you done with Darwin?”

“I’ve overridden him for the time being. My consciousness,” said the android, “will be coming along with you.”

The android shook his head sadly. “I will activate every pain receptor in your body on a randomized schedule until you cooperate.”

Thrax punched the android in the face again.

The android took the blow, then continued calmly, as if he was dealing with a disobedient and unruly child. “It need not be entirely unpleasant. As I can punish, so too can I reward, by stimulating the pleasure centres of your brain.”

“Like so. I also noticed your reaction to the female technowitch.” “You mind your own business, pal.”

“Her name is Mindy. She’s young. Powerful. Combines the gene lines of ancients who had high level command nanites. A clear threat to the Dark Lord. But inexperienced. Unfocused. Vulnerable as a catepillar in a cocoon. Alone, on her own, he will win. She needs your help as much as I.”

Thrax gave it some thought. She was pretty hot. He couldn’t leave her hanging. Wouldn’t be chivalrous. Hell, this was the kind of heroic rescue mission he’d always wanted. A world to save, a beautiful princess to rescue.

Who could ask for more? And, honestly, there didn’t seem to be much choice. “Okay, like I said, I’ll do it. But I think you’re a jerk wad. You could have just asked nicely.”

“Perhaps. And yes, I will release Darwin the instant the Engines of Creation are destroyed.”

Eight-Oh-Nine held out a hand.

He nodded, then remembered as the world began to swim. “Wait, wait! The dodecahedron!”

“Oh, yes.” The android smiled mischievously, his image distorting with his surroundings. “That will be our secret. Tell no one else. Give it to the girl, when you find her. It will give her the power to defeat The Dark Lord if the virus fails. Always have a backup plan, Mr. Thrax. Now?”

“Yeah,” replied Thrax. “Your guts better not have stained my pants.”

As the world dissolved around him, it occurred to him that in the great joke that was life, he’d just become one of the punchlines.

****
Panting, Ghatz rolled off of Jez and stared at the blood red ceiling.

“That was incredible,” he gasped, drenched in sweat.

Jez leaned over him and ran a finger around his left nipple.

“I told you it would be worth it,” she purred, and gave the nipple a sharp squeeze. Ghatz gasped and she planted her lips over his open mouth, kissed him hard, whipping her tongue about, tasting his tonsils, then shoved him away. She slid to the side of the bed. She was still wearing her thigh high boots and bustier. She slipped on her latex bikini and stood up.

“We?” repeated Jez, a shadow crossing her cruel features. She turned about. “There is no ‘we’. There’s only me. You’re a clerk, a front man, commander of this mission in name only. You’ll take my orders. Is that understood?”

“Please.” Ghatz propped his head up on one hand. “You’re squad leader. Andromeda is no longer in command, just like you wanted. But don’t push it. I lead this mission. You’re nothing but an android.”

Jez jumped on to the bed, straddling him, and belted him in the face. Snatching a knife from the bedside table, she pressed it to his throat.

He looked up at her and for the first time, fear in his eyes. Even Jez was a little surprised.

Control engrams should have prevented her from going this far.

She pressed her face into his.

“Personality over programming,” she sneered, half speculating. “You humans think you’re in control. But you’re not.” She turned the knife. “Are you?”

“Release me. At once,” he said sternly, using command tones.

Jez froze for a moment. Started to withdraw. Then pressed the knife back, hard enough to draw a speck of blood. She laughed. “I don’t think so. Not this time. Not anymore.”

Ghatz swore under his breath. “You’ve got a serious discipline problem. This mission is the biggest opportunity of my life. Lacus himself gave me command. It’s my core competency. I’ll die before I give up control!” He glared up at her defiantly. “You’re just going to have to kill me. See what that gets you.”

Jez considered this for a moment, then shifted the knife down below, to his blood engorged staff. “I could do worse.”

They glared hate at each other for what seemed like an eternity. With a laugh, Jez broke the tension and sat up. Relaxed. Smiled.

She tapped him gently on the chest with the tip of the knife. She’d have to be indirect, clever, but properly handled, this mission could result in her, Jez Lykopis, android, ruling the planet as its immortal, beautiful, undying queen. She just had to sell the team out to The Dark Lord, then seduce him. Turn him into her sex slave. Armies would be no defense. She had the skills to make any man she wanted whimper and beg. The possibilities felt so close, so powerful, she could explode. This Ghatz creature would be a stepping stone leading, eventually, to ultimate power. “You’ve more balls than I’d have given a worm like you credit for.”

“Fuck you. You’re colder than a witch’s tit.”

“Yes,” she said, putting the knife aside and pulling down her bikini again. She rubbed her bubble like buttocks against his quivering meat rod. “I think we’re going to make a good team after all.”

And she slipped him inside her and thought of Thrax.

Stay classy, my friends, so I don't have to.