Chapter 8 of Magnum Thrax and the Amusement Park of Doom 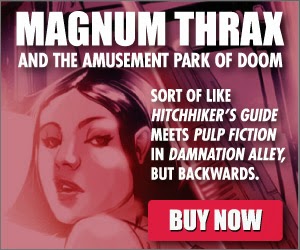 Once more Monday rolls around and rears its ugly head; but don't worry, there's another installment of Magnum Thrax and the Amusement Park of Doom to add further insanity to your morning.

(Pardon the glitches with the paragraphs. For some reason it's not picking them up properly when I paste it in from Word.)


“Ma, that was stupid,” said Thrax as he righted an over-turned chair. “I told you to keep Sally inside during day hours.”

“Thanks, Mr. Obvious,” said Megan from the kitchenette. Thrax sighed. Mom always did this.

Occupied her mind with chores when stressed. Cooking food channeled her nervous energy into productive activity. It could have easily been generated, piping hot and aesthetically styled, instantly by a Drexler box, but not his mom. She preferred the old ways. Touch vegetables with her hands. Cut them with a knife. Something about home cooking, real cooking, a certain taste, that the boxes couldn’t duplicate. She’d even tried to teach Thrax to cook. “Trill sold us out. She wants our unit.”

Sally sat quietly on the couch while Thrax prowled back and forth. “If I hadn’t gotten back when I did, Sally’d be gone, ma,” said Thrax.

“He had a warrant,” snapped Megan. She stepped out of the kitchenette and jabbed a spoon at him. “And you’d be just as invalid as your sister if I hadn’t broken every rule.”

“Nothing.” Megan stirred the pasta with quick, sharp jabs.

“No seriously,” Thrax pressed, growing petulant. “I want to know.”

“It means,” sighed Megan, “that I spent over a year on you. Snuck into the labs and slaved over your DNA, swapping exons, programming transposons, adding custom retroviruses. Made you as perfect as I could. Stole threads from the donor bank, wove them in, too. We have Presidents, movie stars, and athletes in the banks. Bigwigs. Alphas. Taboo against using them is just stupid. Legacy laws” She shook her head angrily. “No lawyers anymore so what the hell. But if any of the other DNA Jockeys had found out... You’d have been discarded. Either way.”

Thrax felt cold. “Never told me this before.”

“You’re a genetically engineered superman! I thought you’d have figured it out on your own. I made you smart. Not smart enough, I guess. No Santa Claus, m’dear.”

Thrax bristled at that. “Leave Santa out of this.” He’d loved Santa Claus as a kid. The benevolent, immortal ancient, who might still be alive. Why was he any more unrealistic than flying entelodons with diaherrea? Ridiculing it was her way of saying there was no Nirvana, no happy ending, no easy way out. The world was a cluster fuck, suffering and pain and struggle and blood and sweat. Red in tooth and claw. On a certain level, Thrax rebelled against that. He’d make the world a better place somehow. Someday. Even if it was only a tiny pocket of sanity in a sea of madness. “Anyway, why didn’t you—,” he started, pointing at Sally. The question was so obvious it didn’t need to be said.

Megan glared at him and slammed down the spoon. “Why do you think? Because I got caught!” She shook with anger. “Do I have to explain everything?”

“You’ve no idea what I’ve had to do to keep us safe, so don’t you lecture. It’s a pitiless world.” Megan walked back into the kitchenette and leant over the pot of pasta, let her face be caressed by steam. Moisture gathered on her chin. “So what will happen now?”

Darwin’s disembodied voice filled his head, “According to the colony’s multilayered codes, you and your sister will be executed, while members of your extended family will be exiled, without trial. I can find no records related to DNA tampering on your record, although several inquiries along this line were made by Guardian Ghatz.”

Megan stood still for a moment. “We could run.”

“Could,” said Thrax dully. “Wouldn’t get far. Ghatz. They’d come after us.”

“If we sabotaged the base first,” said Sally, piping up. “Cause chaos. Set things on fire. Send up the sewer worms.” Her eyes gleamed.

Thrax gave her a worried look. Sometimes he wasn’t sure just who his sister was.

Megan crossed her arms and smiled, leaning against their prehistoric fridge. “That’s my baby.”

Thrax felt a sudden tingle and looked down at his arm. Something vibrated in his pant pocket. He fished into it with his hand and pulled out the dodecahedron.

“What’s that?” asked Sally, looking at the small metal object as he turned it over.

“Not sure. Maybe a bargaining chip.”

He activated his interphone and thought a connection.

“I know, stupid. What do you want, throwback?”

“Coming down to the lab. Got something I think you’ll want to see.”

“They attacked me,” sputtered Ghatz. He was still angry over how wrong the confrontation had gone, and the impertinence of their resistance. It was unacceptable that a lower class creature such as Thrax should be stronger and better looking than Ghatz, light of the new Guardian generation. It upset the natural order of things. “And my bouncers,” he added as an afterthought. “I demand satisfaction, Senator. I demand it!”

He stood in a softly lit, wood paneled room, right out of a 19th century gentleman’s club. Red padded chairs with exquisite mahogany frames, separated by ornate tables, were set beneath elegant chandeliers of the finest crystal. Sparkling, semi-transparent holographic nudes danced in and out of the lights, smiling and laughing silently. Gold framed paintings of steamy erotica by Gustave Courbet decorated the walls.

An overweight man, coddled by plush upholstery, sat before Ghatz. Ghatz thought the man looked like a cross between a bloated corpse and a beached whale, but didn’t dare say so. This was Senator Lacus, the real power and ruler of Pleasurepit Five, who owned fifty-one per cent of the company stock. Supposedly descended from a real United States of America senator, too. Ghatz idolized and hated him. Lacus was fat, lazy, indolent. Yet within all that bag of blubber and cholesterol was a ruthless, capable mind. One that would help Ghatz seize ultimate power. Until then, he wouldn’t cross the senator.

Lacus idly swirled his glass of brandy, watching the rolling surface of the liquid. He had two chins and a low brow that set sharp calculating eyes in shadow. On the table beside him was a tray of snails and oysters in porcelain cups. He grabbed one and sucked down the oyster in a single gulp, then smacked his thick, sensuous lips. He wiped the oyster juice on his smoking jacket, then downed his brandy and waited.

A dutiful sexbot waitress stepped forward and refilled the Lacus’ glass while Ghatz stood and tapped his foot impatiently.

She bowed and strutted away.

Ghatz watched her go, eyes glued to her buttocks, appreciating the hypnotic curves. He’d have to summon her later, after the senator was done. Then wipe the records so the senator didn’t know. Strange how insatiable he was. He’d slowly peel back her bustier...

Ghatz flushed red and blurted, “Do I have to spell it out for you? Revenge! I want revenge!”

“And you’ll have it, my dear, beautiful boy. Fret not. Soon,” he said softly, and took a sip of soothing, thousand year old brandy.

Ghatz stalked back and forth in front of the senator like a caged animal. “I swear you are always favouring them,” he complained. “Same as last time. Pack animals! Dross! They’ve no loyalty to the greater colony. To the team. Just a primitive family unit. Such base loyalties weaken the whole. You taught me that!”

“True, my boy, but the old ways do die hard,” replied Lacus.

Ghatz exploded: “They’re aren’t! In case you haven’t noticed. When’s the last time you went into the lower levels? By the Founding Fathers! I am, we are, fighting to achieve, to realize the ideal, to free ourselves from nature and savagery, to renew the world,” he sputtered. “We are the first mover of the re-enlightenment, who are pushing the envelope of change. Everything depends on me! Us! We need to get our ducks in a row. Does that struggle mean nothing to you?!?”

“Manage your expectations,” Lacus groaned and shifted in the chair. “Ideology can become tiresome. Think of it more as a tool, a lever that can move the masses. And remember, the easiest path between two points is not always the direct one.”

Ghatz rolled his eyes. “Don’t weave your philosophical nonsense with me,” he spat. “What does that even mean?”

Lacus slipped a snail in his mouth and bit it. A little juice jetted out and dribbled down his chin. “Perhaps I’ve overestimated you. The lower levels have less influence and fewer numbers every generation. They pose no serious threat. Now. We don’t want to calcify, do we? Of course not. An element of chaos keeps society healthy. And we need a miserable bottom rung to keep the rest in line. Show them where they might wind up, as it were. Remember, my dear, it’s about the greater happiness, not the individual.”

“They’ve nothing to do with me. They’re disgusting,” said Ghatz. “Spiritually. Physically. Ideologically. Gushing like a pack of dogs, yeah? And that abomination, Thrax! Thinks he’s above Guardians. Above us, the rightful authorities! He even tried to hit me. Me!” He jabbed a finger at his chest and nodded for emphasis, shaking with outrage lit by frustration. “That little demon girl electrocuted two of my bouncers with their own prods! It’ll take days for them to recover.”

Lacus shrugged. “Never been impressed with those mindless thugs. Serves them right. And you should be more careful. Guardians must be constantly vigilant with helots, my boy. Never let them get the upper hand. Consider this a valuable lesson.”

“Explain to me why I can’t execute the lot of them, or I’ll do it anyway. Effectual truth. At the end of the day, the law will support me.”

“Oh, please! Don’t be so melodramatic,” soothed Lacus. “Have a drink. A Guardian must act from reason, not emotion, and yours are out of control. Quite shamefully so, if I may say.”

Lacus looked down into his brandy glass. “I checked the surveillance feed. Thrax received something from that android, outside, you know. Ran it through the databank. It’s fragmentary, of course, but preliminary analysis suggests it might be... valuable. I removed that section from the feed. Mum’s the word. You’ll leave his family alone until we find out exactly what it is.” He waved a chubby finger in a complex pattern, and a hologram of the main council chamber, centred on the android, flicked into view before them.

Ghatz frowned at the shimmering scene, resenting it beyond words. “And if it isn’t important?”