Why I hated The Hateful Eight 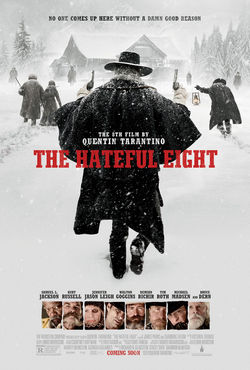 The flick follows a bounty hunter, John 'The Hangman' Ruth (Kurt Russell), who picks up Major Marquis Warren (Samuel Jackson), another bounty hunter and former cavalry officer in the Union Army, and the new town sheriff, Chris Mannix (Or so he says… he's a racist ex-Confederate raider, and he sure don't seem trustworthy) on the way to a haberdashery as a deadly blizzard closes in.

Russell and Jackson have bounties with them. Jackson's are dead, but Russell has a live one: a foul mouthed woman (Jennifer Jason Leigh). She's worth a cool ten thousand dollars, and Ruth means to see her hang.

The owners of the haberdashery are mysteriously away, leaving it in the care of Mexican Bob (Demian Bichir). Major Warren is immediately suspicious.

There are three others at the habedashery : the local executioner (Tim Roth), a cowboy (Michael Madsen), and an old Confederate general (Bruce Dern).

John Ruth is suspicious of everyone; he's paranoid and sees threats to his bounty everywhere, leading to tension and, eventually, conflict.

It might have been titled The Hateful Snore, which would have explained the five minute overture. The first half is all introductions ("I know you!" x 8), followed by Intermission.

The second half is a badly written stage play drenched in blood and brains.

It's Tarantino at his most self-indulgent: crass, vulgar, hateful and ugly. The film wallows in the sick side of humanity with the glee of a pig in a mud pit.

Which would be fine if it was entertaining.

This is no fault of the actors, who give it their all, including the bit players.

The cinematography was fabulous (it's shot in 70mm), the score even better (it's Ennio Morricone), and the main set, a haberdashery (a word Quentin seems very fond of), was delightful in its detailed eccentricity.

Kurt Russell's mustache is so magnificent it deserves an entry in the credits.

But the film doesn't gel.

The always lovely Zoe Bell shows up and is quickly dispatched, along with Dana Gourrier, Belinda Owino, and Gene Jones.

Tarantino's a visionary with in-depth knowledge of the medium. He's one of the most idiosyncratic voices in cinema, along with Wes Anderson and Kaufman.

But even the greats can misstep.
Posted by Gene B at 7:01 AM