Battle of the Blurbs: Magnum Thrax and the Amusement Park of Doom Blurb Bash 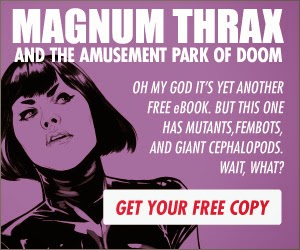 When a giant prairie squid delivers an unconscious android to the door of Pleasurepit Five, everything changes for Magnum Thrax, the King of Kick-Ass and Lord of Rocket Launchers. As leader of a team of fiesty, combat repurposed fembots, he's used to defending The Pit against mutants and legacy ad memes. This time it’s different: the android brings word of an unstoppable, rogue amusement park that is expanding at an exponential rate, threatening to rewrite the world on a subatomic level into sanitized, G-rated blandness.

To stop it, Thrax’ll need help from the technowitches, but the only way to reach them is across The Death Zone. 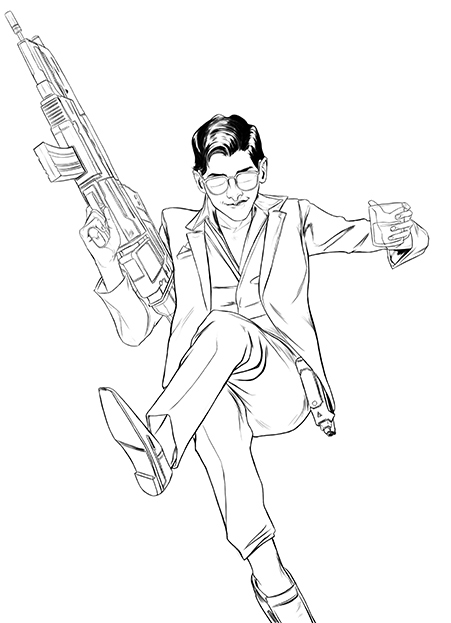 In a post apocalyptic world overrun by mutants, death bots, and legacy ad memes, there remains only one last bastion of human civilization: Pleasurepit Five, a former sex emporium and edifice to all things carnal. It is mankind's last hope in a hyper-predatory dark age.

The defense of the installation falls upon young Magnum Thrax, a genetically engineered warrior-god and king of rocket powered kick-ass who’s otherwise rather clueless.

His world is turned upside down when an enormous, bloated prairie squid delivers an unconscious android to the Pit’s door. The artificial man brings word of a new threat rising in the East: an unstoppable rogue amusement park. Expanding at an exponential rate, it threatens to rewrite the entire post-world on a subatomic level into sanitized, G-rated blandness.

Nothing living will remain, not even a three-eyed atomic rat.

The Pit is sent into a tizzy at the prospect of both imminent doom and song worthy adventure. Inevitably, it falls upon Magnum Thrax to lead an ultra-deadly team of combat repurposed fembots, armed with deadly weaponry and impractically scanty attire, on a mission to save the wretched remains of the Once-World. Joined by his programmer buddy Kal, who provides the brain-power and angst, they’re humanity’s last line of defense.

But to defeat The Amusement Park of Doom, they’ll need the help of a mysterious girl who lives with the dread technowitches. Wielding dark powers beyond imagination, these fetching yet demur witches will turn inside out (literally) anyone who intrudes upon their placid realm uninvited.

Worse, the only way to reach their holy monastery is across the aptly named Death Zone, from which no one has ever emerged alive…

Thinking that I'll try them out with the chapter postings, as lead ins... so you'll be seeing them again.
Posted by Gene B at 6:04 AM