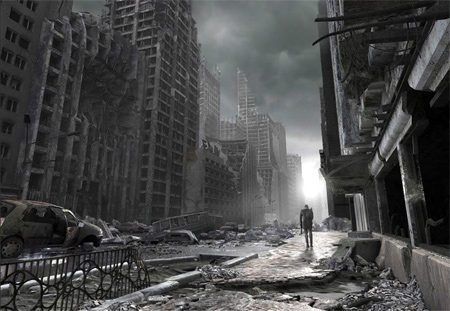 Thrax strode to the abandoned, dust covered cannon and looked out the window at the square. The sleek weapon was undamaged. He wiped dust off the targeting array. Blank. Inactive. AI wiped or slumbering.

Behind him, Jez poked slumped figures with her rifle. One by one they deflated into shapeless bags of dust. She felt a rush each time.

The blue butterfly landed on her nose.

“Leave them alone,” Thrax ordered, annoyed. “These men were soldiers; they should be left to rest in peace.”

Thrax sighed and turned back to the parking lot. Hefted his viewer plate and scanned the ruins. Half buried in ash were thousands of rusted metal lumps. Ground vehicles. The wrecks were scattered randomly towards the edges of the lot, but in orderly rows nearer the centre. A few were in perfect condition, gleaming in bright, candy colours, their chrome as shiny as the day they left the mega-manufacturing box. Testament to quality nanite maintenance systems running endless repair cycles.

Thrax activated threat analysis. The plate throbbed gently. Crosshairs flickered. Dozens of possible minefields and energy signatures lit up. Too many to calculate or separate out into individual threat evaluations. Basically, the parking lot was bad news.

The far side was hemmed in by a wall of biobuildings, their broken and torn husks soaring almost a kilometer high. Windows gone. Millions of places to hide snipers and hunter killers. Place was a freakin’ deathtrap, just as the limo said.

Ghatz lowered his own scanner. He turned to Hercules: “I don’t like it.”

Hercules nodded. The butterfly had landed on his neck. A thin probe jabbed into his spine. Hercules blinked, then twitched. He raised up his pulse pistol and aimed it at Thrax.

At that moment, Jez jabbed the last mummified soldier in the groin. A bright light blinked behind the face mask.

It fell with a loud clunk on top of the table and emitted an odd, alarming noise. BEEP BEEP BEEP

“Booby-trap!” yelled Thrax. He threw himself out the front window just as Hercules fired. The bolt blew a hole in the wall.

Ghatz was mere seconds behind Thrax, leaping out the same window and landing awkwardly atop him.

Thrax shoved Ghatz off and lifted his head. Peered into the room.


The hulking android stood unsteadily in the middle of it. He seemed confused. Stunned. Jez ran past him with super human speed, respirovores pushed to the max.

Jez rolled rapidly, putting out the fire, and unfolded to a stop in a combat crouch. Smoke curled from her burnt jacket. Maintenance cycles in the high tech garment quickly repaired the damage. She got up and strode over to the two men as they clambered to their feet.

“Nice,” Thrax groused, dusting off his suit. “So much for the element of surprise.” Jez glared back. “You goaded me. Not my fault.” She grabbed a big charred ball at her feet and chucked it at Thrax.

He caught it on reflex and involuntarily shivered: it was Herc’s head.

“Give him a kiss,” snickered Jez, and she set off for the car.

“What the hell?” exclaimed Kal, looking out at the smoke and flames. “Something’s gone wrong. Let’s pick them up.”

“Not a chance.” Sang flipped a panel up and hit an exposed switch. The turret mounted Bofors guns swiveled to life, locked on the horde and spat a thousand rounds of depleted uranium shells a minute at the nano-zombies, blasting then into dust. Coil mounted scoops stretched out from under the limo, latching on to metal debris, dissolving it and sucking up material for the onboard Drexlerbox to make replacement ammunition.

“Thrax!” Kal said into his mic. “You alright? Speak to me, choombata.”

“I’m good,” filtered back Thrax’s voice. “Tripped a booby-trap. Comin’ back.” “Hurry it up; we gotta roll.”

Thrax, Ghatz, and Jez raced around the corner and charged towards the car.

Kal slide back the sun roof and stuck his head out. “Run, you Death Zone celebrities!” The Bofors guns fell silent.

Kal glanced behind the limo. The zombies were obscured by clouds of smoke. He looked up and could see the red lights in the recesses of the buildings. Faint, shimmering red lines lead down from them and then snapped onto... the limo’s roof.

Kal felt his stomach tighten: the roof glowed red with laser targeting dots. A dozen split off and zipped towards Thrax, attracted by the combination of body heat and movement.

All at once the mystery gunners opened fire and the air crackled. Kal ducked back in and and locked the sun roof.

Depeleted uranium bullets peppered the ground, the car, everything. Ash and shrapnel spat into the air.

Kal cringed. It sounded like a hailstorm was hitting the roof. Fortunately, their aim was substandard. Most of the shots were going wide.

As Thrax dived the back of the limo, a bullet smacked into the back of his calf, splashing it with blood.

Ghatz leapt head first into the front seat and was shoved into Sang by a frantic Jez; she quickly reached out, snagged the door handle, and slammed it shut as a nanozombie rushed up and raked the window with knife sharp claws. Seconds later stray bullets from above cut it to pieces.

The deluge of lead made the roof bubble inward, yet the hull defenses held. It was one well built car, thought Kal, impressed.

Zombies closed in regardlesss, totally focused on the vehicle and its juicy living occupants. They got shot to bits by the hundred.

A steady barrage of lasers blasts shot out in all directions from the cabin, through the windows, which let the energy pass out of the car without interference, but still blocked incoming ordnance.

Sang put the pedal to the metal. The car bolted forward, a tail of roiling ash clouds following. It swerved between corroding vehicles, cutting corners too tightly, sending wrecks spinning and burning and throwing glowing sparks. Warning lights flashed as Sang drew too close to an identified mine. He angled away and accelerated just as several mines went off. Huge chunks of metal and diamacrete were blown skyward but the car was unscathed.

From distant towers high above, energy beams lanced out, slicing holes in the top of the limo. Beams sliced through the androids, leaving several with flesh wounds. One long burst hit Jasmine in the leg, neatly slicing it off. She let out a horrific scream of agony and clutched the stump. The ceiling holes bubbled shut. The surface adapted to the beams, rendering them ineffective.

Candy quickly grabbed the severed limb, pulled out a Healit nanonutrient gelpac and slapped it over the bloody stump. She angled the severed limb and lined it up with what remained attached to Jasmine, then pressed the two together. As nanite swarms began to knit the limbs, Jasmine writhed in agony.

“Turn off your pain receptors!” Candy shouted. Jasmine wasn’t listening. Candy dipped into her bag and pulled out an injection tube, then slammed it into Jasmine’s good leg.

“I can’t dodge at that speed,” protested Sang.

“Why the fuck are you driving then?” demanded Jez. “Let me drive!”

“Do it, Sang! I’ll help course correct!” said Kal, bringing up a slew of holographic interfaces.

Sang lit the engines and the car accelerated to an almost unmanageable speed.

A thought bomb burst below, but its targeting algorithms had not anticipated the target’s increased velocity. The limo was almost out of range of it when it detonated. Their minds filled momentarily with panic: ‘WE’RE ALL GONNA DIE!’ Then it faded and was replaced by perfectly normal, natural panic.

Out of the wreckage below insectile hunter bots rose up, antimatter lances sparking on contact with air. Segmented, gleaming metal millipedes unfurled out of their nests and locked on the source of the commotion.

Thrax rolled about on the floor beside him, grasping at his shattered calf. Black lines began to spread from the wound.

“It’s a burrower bullet!” said Kal, alarmed, “Candy! Get it out fast!”

Candy slid over, grabbed and unsheathed Thrax’s knife, dug it into his leg, and opened up the wound. With her other hand she reached inside and yanked out a squriming black shell that had sprouted branching tendrils. They writhed in her hand, then wrapped around her wrist and began to dig into the flesh.

“Hold on.” Andromeda closed her fist and touched the wriggling shell with her EMP cereal prize ring. It sparked and the writhing tentacles fell lifeless.

“Get a pack on that,” said Andromeda, pointing at Thrax’s leg. “It will need material to rebuild.”

Thrax collapsed against the floor and was thrown back against Candy’s magnificently curvaceous legs as the car angled sharply upward. “Fix the damn dampeners!”

“Halfway there!” Sang shouted, hope rising. Sang could see a ring of red dots closing around the vehicle on the threat map. “Deploying wings. Firing afterburners!”

The limo flew off the ground and heaved awkwardly into the sky as gleaming legged tentacles crashed into each other below, metal and synthetics buckling.

“We’ll skim over the mall domes, use’em for cover. Buckle up!”

The team shook in their seats as the limo throbbed with power.

Lasers and electromagnetic railgun shells, propelled at supersonic speed, cut through the air. Explosions burst around them.

“I’m too beautiful for this shit!” exclaimed Kitty through chattering teeth, her features scrunched by g-forces.

Sable frowned. “I don’t see what that–” Her voice vibrated in unison with the shuddering vehicle frame.

The limo was tossed upward by an explosion’s expanding bubble of superheated air. Unsecured items and passengers were tossed aloft, momentarily freed from gravity. The vehicle snapped down again as it angled downward to evade an oncoming wave of air grenades.

The wreckage below was engulfed in flames.

Kal directed ECCM at incoming missiles, detonating dozens prematurely. “Counter fire! Take’em out! Give it all you got!”

“You heard the man; light’em up!” Thrax growled, priming his rifle. The androids faced outward, hefted their weapons and let loose with a barrage of defensive fire.

As the limo climbed up the battered side of the foremost dome, a missile missed by Kal closed in from behind.

Thumper tried to get a bead on it with her rifle, through the rear window. She let off several shots. They went wide. Aimed again. Missed.

Andromeda dropped against the back seat, leveled her rifle and snapped off three expert shots, each hitting home. Three missiles gone.

“Brace!” Andromeda yelled, ducking down and covering her head.

Sang’s heart sank. Despite all his meditation training, his voice rose in volume, “Lost control!”

“Do something!” screamed Jez.

“We’re going down,” said Sang. “Everything is out.”

“No shit, Sherlock,” replied Kitty from in back. She racked her rifle, closed her eyes, and assumed crash position. The others followed suit.

“Useless idiots!” growled Jez. “I could have ruled the world!”

Sang tried to angle the limo to skim the dome, and it almost worked. The car hit the grime encrusted surface and bounced, leaving a dent. Hit again, then burst through, plummeting with spinning fragments of reinforced synglass into the darkness of Liberty Megamall.

Gigantic, grinning faces of happy children and moms carved in the finest marble rushed up out of the darkness and vanished again. Girders passed by. Signage. Tattered banners. Cables. Christmas decorations. Mirrored partitions.

The limo hit a concrete wall, plowed through it into racks of expensive, preserved clothing and animatronic mannequins. Sparks arced as the limo skidded across a dusty marble floor and slammed into a huge fountain’s forlorn, ash filled pool.

Waves of dust and debris fell from the ceiling, caking the limo in what looked like freshly fallen snow.