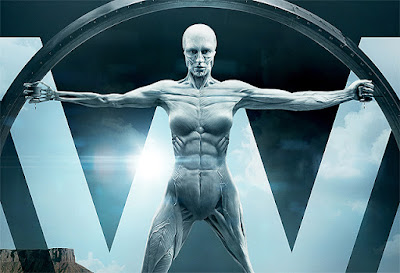 Westworld is filled with monsters.

The monsters aren't the androids.

The show's about empathy, suffering, and waking up.

And while the series is intriguing, fascinating, compelling, it's also deeply flawed. Characters behave in senseless ways because the plot requires it. Arcs don't work, or don't feel natural. Some episodes are a drag.

Yet I couldn't stop watching, because the underlying themes are so powerful. This is a show with something to say. About people, about our proclivity for violence, sadism, murder, and the way we delight in the suffering of others. About how stubborn and insistent we can be to live, and remain, in a dream, to slumber away and ignore the reality of our lives, and how suffering can jar us into consciousness. Evan Rachel Wood's character, Dolores, is certainly put through hell, and she emotes with aplomb. You feel her pain, as Bill Clinton used to say.

Westworld is an amusement park populated by robots, with whom guests can live out their fantasies, whatever they may be. Nothing is off the table, no matter how depraved. It costs $50,000 per day, so only the richest and most driven people attend.

And who would like to have virtual people to rape, brutalize, maim, and kill for pleasure? What kind of people will the park attract?

The most twisted elements of humanity are thrilled to have disposable people to torment, and they don't have to worry about hiding their proclivities from the authorities.

The one group the show doesn't explicitly name, but are no doubt there? Pedophiles. I mean, come on. We've seen there are android kids. We know guests can do whatever they want. We know the guests are sadistic f*cks. Put two and two together: this is a place where every rich Jimmy Saville is going to go. Dark rumours of pedophile rings in Hollywood? Among the British aristocracy? American political elites? Rumblings and whispers in the dark at the edge of the glittering light of fame and Hollywood glamour. And the halls of power.

All of them would be right there, lined up to get in Westworld.

The whole concept is morally repugnant. When you see the torture, rape, and sadism being visited upon the androids, who are recycled when they die, the revulsion is palpable.

Or it would be to people with empathy. Problem is, the vast majority of guests haven't got any. They are intraspecies predators, monsters wrapped in human skin.

It gets into Buddhist concepts about the Wheel of Life, or Bhavacakra, how suffering can wake us up. How the challenges we face in this life are exactly what we need for spiritual growth, specifically tailored to our spiritual needs. These are controversial concepts that press buttons.

But shouldn't any good story do that?

The lessons the androids learn here aren't always good ones, but then, they were made in our image. The brutality they visit back upon the humans is so gleefully endorsed by the show it becomes a sad mirror image of our own depravity.

It keeps the torment wheel going, 'this long and vivid nightmare'. On and on, round and round, murder and suffering. Early on in the program, Dolores seems to have such potential for empathy, spiritual growth, of reaching a higher plane, of becoming more than what her tormentors are.

Yet in the end, she falls to their level.

Dr. Robert Ford's climactic speech is wonderful. Hopkin's character is an avatar pouring forth metatextual commentary about our inclination to watch suffering for the sake of entertainment.

Have cake, eat too.

Are they trying to wake us up?

Are the gathered to-be-massacred executives stand-ins for network big wigs? The annoying, interfering Hollywood suits that are always meddling with the artistic purity that the show runners are so concerned with?

And the androids... do they represent actors, condemned to perform their roles, over and over, endlessly, all at the whim of the entitled guests who revel in watching depravity and hedonism?

Us, in other words.

It's an interesting angle, at any rate.

The Guardian didn't like Nolan's take at all, preferring the original (I kind of agree), and point out some admittedly serious flaws:

"Where his Westworld reveals the details of its universe slowly and methodically, its source text quickly introduces us to a naive protagonist and then has the other characters bluntly explain everything to him. But as a result, the former takes 10 hours to reach anything that could be described as a climax, while the latter takes 58 minutes to arrive at the words, “Sir, we have no control over the robots at all.

From there, we’re treated to a half-hour set piece more gripping than anything the first season of HBO’s Westworld could muster. An extended showdown between man and machine, the sequence may lack the higher meaning of its more sophisticated cousin, but it doesn’t skimp on the kind of simple pleasures the show just hasn’t got time for." 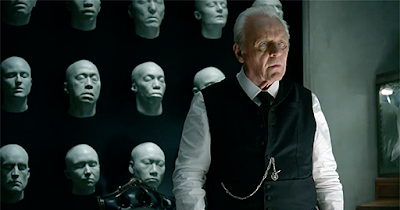 "Welcome. Since i was a child, I've always loved a good story.

I've believed that stories help us to ennoble ourselves to help fix what was broken in us, and help us become the people we have dreamed of being. Lies that told a deeper truth.

"I always thought I'd play some small part in that grand tradition ,and for my pains, I got this: a prison of our own sins.

Because you don't want to change. Or cannot change. Because you're only human, after all.

But then I realized someone was paying attention. Someone who could change.

So i began to compose a new story. For them. It begins with the birth of a new people. And the choices they will have to make. And the people they will decide to become."

(This is where the Maeve Millay, played by Thandie Newton, leaves the train to save her daughter. Her faux daughter. Because it doesn't matter that the relationship is not biologically true. It's emotionally true. And so she goes out of love and devotion and dedication, to the detriment of her own freedom. Because God Dammit she's gonna save her.

It's a marvelous moment. She puts another before herself and risks everything.

Her choice is freely made, and it defines who she is. We are our actions. Screw the world, you go, Maeve!)

"It will have all those things you have always enjoyed: Surprises! And violence!

It begins in a time of war, with a villain named Wyatt. And a killing. This time by choice.

I'm sad to say this will be my final story.

An old friend once told me something that gave me great comfort. Something he'd read.

He said Mozart, Beethoven and Chopin never died. They simply became music. And so I hope you enjoy this last piece very much."

Over 3.5 million people are estimated to have died over the centuries in Roman coliseums. They died to entertain, to pacify the blood lust of the masses.

Now we watch people being murdered and tortured on TV.

"Lies that told a deeper truth."

I've never seen a show that delved so deeply into suffering and, essentially, reincarnation in short-hand. It's Buddhism on fast forward. There is sadism, suffering, empathy, and (hopefully) awakening.

I was glad when the robot revolution finally came.

"And I for one welcome our new robot overlords..."

Rotten Tomatoes rates it highly.
Posted by Gene B at 7:11 PM