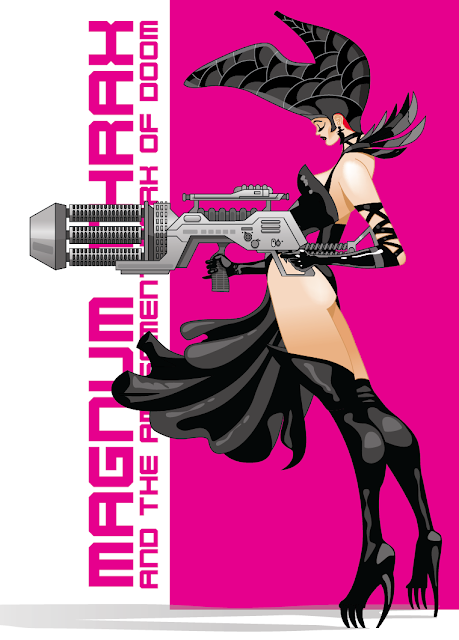 Down below, Kal shivered and snuck a look up at the raptors. The birds didn't like you looking at them, he’d noticed that, but then, he'd never seen them close up before. He’d never been this far out of the safe embrace of the velvet lined Pit before. It would have been a fabulous opportunity to study raptor culture and customs, if they weren’t so intent on eating him.

A squeak of fear behind him brought him back to more practical concerns: Sally. She couldn't be more than four or five, by his best guess. Maybe six. Kal had a hard time judging ages. Her presence had become a real problem, considering their impending sacrfice.

Who knew a bunch of raptor religious fundamentalists would seize the mine during their visit? He’d calculated the odds several times, and they were infinitesimal. He could hardly be blamed for such an unfortunate and unlikely turn of events. Besides: education went hand in hand with adventure, and what was adventure without danger?

Might as well stay home and sit on the couch. Of course, Thrax would blame Kal anyway. Call him reckless, get mad about losing his pistol, endangering his sister, gambling away the zinc, blah blah blah. Life was so unfair sometimes, thought Kal bitterly. He meant well, after all.

He'd noticed earlier that the Red Raptor seemed interested in his appearance, and he'd been right: his red hair and freckles had whisked him to the front of the sacrifice line. Maybe the raptor felt some kind of cross-species ginger kinship with him.

The raptor chief paused in his celebratory dance.

Yes! Kal saw a chance to finally engage in dialogue. He cleared his throat. But what to talk about? Quick! Improvise!

“You're not dinosaurs!” he blurted.

A hush fell over the raptor crowd. Their eyes went wide. Heads cocked to the side.

Red stiffened and focused an eye on Kal.

He had their attention!

In a blur, Red swept in front of him. “Liar!” Red snapped, jaws inches from Kal’s face. Moist, fetid breath washed over him. “What you know, stupid rat-mammal! Sacrifice not supposed to talk!” It angrily swept a fore claw through the air for emphasis. “We dinosaur! We dread reptile!”

“Oh, no, you aren’t,” said Kal matter-of-factly. “You were built from chicken DNA.”

The raptors gasped in horror. It was like he was saying something heretical. Maybe this wasn’t a good avenue to go down after all…

“We not chicken!” shrieked Red, growing angrier. “Our blood pure! We king lizard! We God’s Chosen!”

Kal shook his head. “No, sorry. Look. Some DNA jockey stimulated chicken hox genes, spliced in a few bits of amphibian code, maybe some frog, and poof, nasty raptor chicken. That’s you, see? I don’t know what the hell they were thinking, or why they’d need a mean chicken, but there it is. You’re a bunch of genetically altered, oversized poultry. See, amber wouldn’t help. Now stay with me, this is complicated: DNA deteriorates over time, so…”

“Two hundred forty-seven million years actually, but you’re a little late. By about sixty more million years.” Kal grinned as a realization hit: “Saaay: you can't kill me, can you, Red? Not yet, I mean. I’m your sacrifice, right? I have to die in some special way down there, so I can say whatever I want, for the moment,” he mused, then inspiration struck. “Bawk bawk bawk!” he taunted. “Bawwwwk bawk baaaawwwk!”

“Lower rat-mammal in pit!” screamed Red as it swooped about the platform in an apoplectic frenzy. “Death to rat-mammals! Rat-mammals ruin everything! We God’s children. So say Holy Bible Book. Praise be to God!”

“Have you even read the Bible, Red?” asked Kal. “You’ve got it all wrong!”

Raptors awkwardly worked the winch and lowered Kal and Sally into the fossil-lined arena.

“Whoa,” said Kal, growing alarmed. This had gone a bit off plan. Never get sidetracked, he reminded himself. “Wait, Red! Let's talk about this! I know stuff. Give me a splicer and I’ll weave in some alligator code in for you, eh? No? Wings? You’d like wings, wouldn’t you? Or gills? Gills! I bet that’d get the attention of all the chick raptors, eh? Better voice boxes? Natural deodorant? You kinda stink. C’mon! You're making a big mistake here! I'm a valuable resource… Let the girl go, at least!”

The raptors ignored his pleas.

“Release Holy One!,” commanded Red with a theatrical flourish. “Release Big Jesus! Let him feast upon flesh! Eat bad smell rat-mammal and show us the way!” The raptor hoot-barked triumphantly. It pulled a pistol out of its harness and fired it into the air three times.

It was Thrax’s magnum! So that’s where it’d gotten! Now all Kal had to do was escape, save Sally, and get the gun back so Thrax wouldn’t kill him.

Kal turned to the little girl. It broke his heart: she’d never have the chance to grow up, not now, which made Kal feel bad on the kind of emotional level he generally preferred to avoid: “Sorry, kiddo. You can't reason with raptors. If I wove some human brain cells into their craniums, maybe things’d be different. But some beings are afraid to change…”

Sally gave him a cross look and folded her arms. “You don't do genetic engineering. My mom is a DNA-Jockey, and she says you don't know your ass from a hole in the ground when it comes to splicing. You’re just a big mouth that–”

“Kid,” admonished Kal, “If a lie can get you out of being sacrificed, you go with it. Besides, I'm sure I could pick it up in six months or less. How hard could it be?”

There was a screech-rumble. Rusted metal doors were jerked back, revealing an enormously upsized raptor.

Kal gaped: it was a Tyrannosaurus Rex. Impossible!

Sally took one look at it and softly breathed, “Cooool!”

The beast let out a roar that reverberated throughout the chamber.

“That’s just not right!” shouted Kal, waving a finger at them. “I know Jesus! Jesus is a kind of friend of mine. I mean, I went to church and all. And that,” he said, pointing at the Tyrannosaur, “is no Jesus!”

He was met by another ear-splitting bellow.

Kal’s stomach sank like a gold brick. “I admit, technically, pretty impressive,” he squeaked and swallowed. “I hope the DNA-jockey signed the code… love to get a look at that.”

“Cultural appropriation!” yelled Kal back at them. “The real Jesus was a Semite!”

The Tyrannosaurus Rex didn’t react to Kal’s stinging rebuke. Instead, it charged. Or maybe that was the reaction. What happened to turning the other cheek? Lost in translation?

“Split up!” shouted Kal, and he shoved Sally to the right while he sprinted left.

Caught off guard, Sally yelped and fell, hitting hard and sprawled onto the sandy floor. She lay immobile, helpless.

Kal looked back and saw Sally look up in horror as the Tyrannosaur loomed over her. Time seemed to slow. Details leapt out at him. Downy feathers around the dinosaur’s eyes. Drool glistening on sabre like teeth. The bumpy pink tongue covered in gooey saliva.

Then Big Jeez veered off, its attention caught by Kal’s still fast moving legs. The dinosaur’s huge muscles flexed. It angled to cut him off. Damn smart! The torso swept down and the maw opened wide. The stink of rotten meat hit Kal full on as it closed in.

Desperate, he did a hard turn, spinning in mid-step, then set off at a right angle.

Big Jeez wasn’t as agile and flew past, ramming into the arena wall with a resounding crunch that sent a vibration through the rock.

The raptor crowd let out an ‘aww’ of sympathy-pain.

A chunk of stone gave way, and a raptor toppled in and landed atop the enraged Tyrannosaur, while Kal watched from a safe distance. The smaller, lithe predator thrashed about, flipping itself off the dinosaurs back, only to be caught mid-air and get bitten in half. Kal cringed. So no loyalty between dino-kind. Blood squirted out and spattered the surprised raptors above. They hooted in awe. What on earth possessed them to worship a leader who cared so little for their lives? Crazy raptor-chicken! Kal was so grateful to be human.

Kal scrambled up the rock face, prompting raptors to pelt him with rocks, just not big ones because they had such lame little arms. He taunted them. Then one struck Kal in the forehead and he toppled backwards.

He got back to his feet–the Tyrannosaur was closing in!

The dinosaur slid to a halt and swept round, snapping at his legs, missing by mere inches.

Kal looked up and saw a vision: Thrax flying through the air, arms flailing, hunting knife in each hand. As puffs of gas spurted out of his wrist and ankle jets, Thrax hit the back of the Tyrannosaur, slamming a blade into its back. It roared in pain. Thrax’s legs swung out past, then snapped back. Only the blade’s molecular grip kept him from losing hold. Scrambling, Thrax struck the other blade into the beast’s flank and proceeded to mountaineer his way towards the beasts head, using the knives as anchors.

Big Jesus spun around, biting air, spinning in circles but unable to reach him.

The raptors roared in outrage at this affront to their holy ritual. They looked to their plumed leaders for guidance. Before any could be given, explosions burst among them as plasma grenades began to go off in their midst. Laser beams sliced through the crowd, cutting raptors into steaming chunks of BBQ chicken.

Kal pressed himself up against the wall of the pit and tried to think like a rock.

Except for the ones that leapt down into the pit and raced after Thrax.