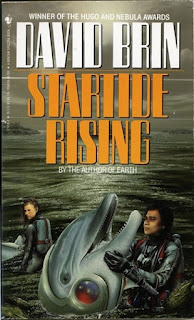 One of my favourite sci-fi writers of all time is David Brin.

My aunt bought me a copy of Startide Rising as a gift in The Long Long Ago, back when we actually left our abodes and met in person (It happened!).

We now live like Isaac Asimov’s Solarians, each in a separate world...

Anyway, Startide Rising (published in 1983) is a mind blowing, magnificent journey into imagination. The science is fanciful, but backed by Brin’s expertise in physics and work at NASA.

He sets the adventure of the startship Streaker in a universe of breathtaking scope: the galaxy has been populated for millions of years. In fact, it is a seven galaxy spanning civilization, or multi-civilization, composed of thousands of different species and loosely governed by Galactic Institutes. The nearest parallel would be The United Nations.

Of course do not have a copy of the book currently, as I’ve loaned it out to a friend. Again. I’ve bought multiple copies over the years as I often don’t get it back. Looks like I need to order another.


Here’s the description of the book, taken from the Wikipedia page. I believe it is partly pulled from the old back cover, but I can’t be sure anymore (The Amazon book description is not as compelling as what I remember from the book jacket):

In the year 2489 C.E.,[3] the Terran spaceship Streaker — crewed by 150 uplifted dolphins, seven people, and one uplifted chimpanzee — discovers a derelict fleet of 50,000 spaceships the size of small moons in a shallow cluster. They appear to belong to the Progenitors, the legendary "first race" which uplifted the other species. The captain's gig is sent to investigate but is destroyed along with one of the derelict craft — killing 10 crew members. Streaker manages to recover some artifacts from the destroyed derelict and one well-preserved alien body. The crew of Streaker uses psi-cast to inform Earth of their discovery and to send a hologram of the alien.


When Streaker receives a reply, it is in code. Decrypted, it says only: “Go into hiding. Await orders. Do not reply.”

The book starts In medias res, with the Streaker already in hiding and The Five Galaxies going batshit trying to find them.

The way Brin describes the thinking of aliens (and animals) here is compelling, really getting across as sense of ‘other'. The dolphin crew members use Haiku, for example. Little things like that, different ways he uses language (poetry, sentence structure, punctuation), go a long way to establish that these beings think different and probably buy Apple.

And yes, dolphins! Startide Rising is part of Brin’s Uplift Universe, where space faring species scour the galaxy for pre-sentients to raise up into civilization. They take them under their wing, tailor them genetically to whatever task they wish, demand indentured servitude for 100,000 years as payment for this ’service’, and then let them go so they too can then scour the galaxy for species to uplift, and the process repeats.

Such a fascinating idea! Talk about scope and thinking long term.

Humanity, for it’s part, upsets the entire system by uplifting dolphins, apes and chimps before even coming into contact with Galactic Civilization, meaning we don’t have to spend eons in service to one of the senior races. Which pisses them off no end, and gets humanity labelled ‘wolflings’.

Some of the aliens are reasonable and noble, others rapacious and predatory (Jophur, Soru). The Jophur are a favourite: collective organisms made up of living 'rings'. They always came across to me like ambulatory fungus. The description of them from Wikipedia https://en.wikipedia.org/wiki/Uplift_Universe#Other_clans_(of_aliens) :

The Jophur are a fictional extraterrestrial race in the Uplift Universe. Physically, they are a stack of waxy, living rings. Each ring serves a different purpose, and they connect to each other to form a single being by chemical means via an electrically conductive, sap-like substance that flows down the center to bind the stack together. A "master ring" provides a strong sense of individuality to each stack and enforces this with corrective electrical shocks to non-compliant rings.

The Jophur were originally the traeki, intelligent but often indecisive because of internal debates between the rings that formed each individual. Their patrons, the Poa, asked the Oallie to engineer the traeki further to increase their effectiveness. The Oailie created "master rings", shiny black rings (often described as "silvery") that created a strong sense of self-identity. The newly invigorated Jophur, as the traeki with the new master rings were called, quickly became a strong, vigorous force in the Five Galaxies.

Who comes up with this stuff? Brin! He has some of the best aliens you’ll ever encounter in fiction. Honestly, he should make a few Pokemon. 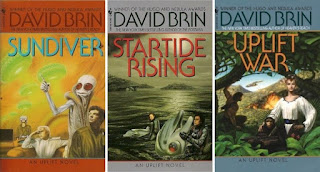 The first trilogy books (Sundiver, Startide Rising and The Uplift War) are not a continuous story; they’re set in the same universe, but do not directly flow from one to the other, and none of the same characters appear. The second trilogy (Brightness Reef, Infinity’s Shore, Heaven’s Reach), however, is a three novel arc, compromising a massive cast of humans and aliens.

Brightness Reef is set partly on the planet Jijo, which has been illegally settled after having been declared a fallow world. The whole idea of fallow worlds is awesome: it shows the time scale these civilizations operate on.

...The Streaker, with her fugitive dolphin crew, arrives at last on Jijo in a desperate search for refuge. Yet what the crew finds instead is a secret hidden since the galaxies first spawned intelligence—a secret that could mean salvation for the planet and its inhabitants … or their ultimate annihilation.

Heaven’s Reach (published in 1998) brings it all to a soaring conclusion. It even features fractal worlds (where Retired species go to play cosmic yahtzee. I’m making the yahtzee stuff up. It’s way more exciting than that).

One of the greatest problems I have with sweeping, epic fiction is that so often the pay off to the mysteries the author sets up are so... lacklustre. This is especially true with television, where the whole idea is to hook people with a mystery and then keep them hooked in perpetuity. An ending is not necessary, or even wanted. The big thing is to keep people coming back and continue getting advertiser money, so the crew stays employed. Everyone’s gotta eat. But it doesn’t lead to satisfying endings (I’m looking at you BSG, selling out your complexity theme for a simplistic let’s all throw our technology into the sun with no dissenters nonsense finale).

Brin, however, pulls it off. The second trilogy is mind bending, getting into memetic worlds and galactic drift and more. it’s a truly epic conclusion. Others may (and have) disagreed, but they don’t know what they’re talking about. This is smart, imaginative, unique stuff.

One down side is that it is so way out there it’d be hard to film, and Hollywood is notorious for being unwilling (in general... The Arrival is a great exception) to depict truly alien aliens. Even the Borg, who started out very different (at least psychologically, as a collective), got a ‘Queen’ in order to make them more relatable.

Of course, aliens are usually just a way to talk about ourselves. I don’t think that’s always the case with Brin: he genuinely puts thought into how a species with a certain ecology would behave differently. And he gets that across.

He did have his novel The Postman turned into a film starring Kevin Kostner. The book, in my opinion, is far better, with greater depth and complexity and a solid theme that isn’t conveyed as well in the film. This book has some of Brin’s hardest hitting emotional moments.

Earth, another stand alone novel he wrote, is about, well, the future of life here. It’s also got some mind expanding ideas, which I don’t think I have the scientific knowledge (or memory) to really explore, given how long it's been since I read it. He was ahead of the curve on a lot of issues (oligarchs and the effect of cameras proliferating).

Existence is the last book of his I have read, and I admit it wasn’t my favourite.

Heart of the Comet he wrote in collaboration with another author, Gregory Benford, some time ago. I confess was a difficult, yet truly rewarding read. I had to go over some passages twice (or more) to truly understand what he was saying. It’s hard science sci-fi. Like reading Stephen Hawking, only with nail biting adventure, suspense and high stakes.

Brin also contributed to the Foundation series, writing Foundation’s Triumph, which ties Asimov’s books together, including Pebble in the Sky. It’s just awesome. I have no other words. Read it!

It amazes me how brilliant our scientists and theorists are, to imagine mind bending yet plausible scenarios. I can imagine all kinds of stuff, but the majority of it falls into sci-fantasy / satire at best.

We all have our strengths?

Brin has also written extensively about transparency (see The Transparent Society) and currently writes a lot about politics in the United States, which he obviously cares passionately about. If he buys into something, it always gives me pause.

There are some threads about Donald Trump, for example, that I thought were so out there they had to be conspiracy theory, yet there is an unsettling amount of evidence that they are actually true.

Brin also surfaces how Republicans, who talk a good fiscal conservative game, are actually dreadfully profligate spenders. I find it incredible this is not more widely known.

Anyway. Enough about politics. This blog is about sci-fi.

If you have a true love for sci-fi, I suspect you’ll love his work. His imagination is truly epic in scope and scale, like rock candy for your brain. If there’s any series in sci-fi I would recommend (along with Foundation and Ringworld and Heechee and Hitchhikers, and okay, well, there are a lot, but this is right up there, you can start with it), it’s Startide Rising.

Give it a read, you won’t be sorry.

And his guide to aliens is also good. Not as in depth as I might have liked, and painted illustrations would have been preferred (just being picky). 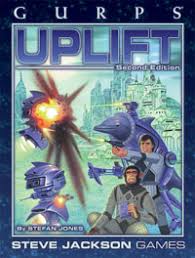 There are even some old GURPs books for the Uplift Universe.

I’d love to see some lushly produced coffee table volumes covering Uplift, with detailed paintings, like a Barlowe Guide. Or graphic novels. That would be cool.

Joh Wimmer reviews Startide Rising for Gizmodo here. He delves into the book in more detail, and while I don’t really agree with his criticisms, it’s good to get another point of view.