Quest for an Audience Part… uh… 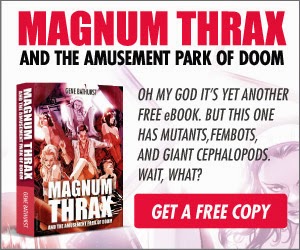 So, where am I with all this self-publishing schtuff? This online flim-flam word jam? What have I learned from writing Magnum Thrax and the Amusement Park of Doom?

Mostly I've learned what not to do (Doritos. Awfully messy).


I know the market is saturated. It's like a single french fry injected with the contents of an entire ketchup bottle. And I'm talking one big damn bottle of ketchup, something you'd buy at Costco and wheel out on a dolly. With over three million books on Kindle alone, you need to be very, very good to stand out.

There are lots of free books out there. Thousands and thousands, and hundreds of new ones every day. It's difficult to even give books away unless you have an absolutely captivating cover and bang on blurb. Think concise. High concept. Story outlines that can be conveyed in one single, sweet sentence and still blow people's minds.

To rise above the vast ocean of books, you need to write populist material which gains readers and reviews quickly. Otherwise, your book sinks into oblivion.

And you need to be fast and capitalize quickly on success. Write a 'book' (30,000 to 45,000 words) per month, all part of the same series, and keep pumping them out in order to stay in the spotlight.

Otherwise, you sink into Oblivion. On the plus side you get to hang out in Iceland with Tom Cruise.

Writing one book will get you nowhere and no readers.

You need a series.

And of course there are exceptions that prove the generality.

I suppose I kind of did, in my typical butt-backward, muddled sort of way.

It's always been tough to make headway as a writer. Most books put out by traditional publishers sell under 500 copies. And publishers carefully pick through the materials they receive, rejecting virtually all of them. They publish only a small handful of what they consider the very best submissions. The cream of the crop. And these select, elite few still lose money most of the time. They require megahits to pay for not just their rents and salaries and promotional costs, but for all the money losing books as well.

Seems like a crazy business model if you stop and think about it. Like setting out to make widgets, only 99 per cent don't work and cost money, and I bet the farm on the 1 per cent that do to pay for everything else. It just sounds weird.

I boldly (if I do say so myself) decided to write a book and let the cards fall where they may. Much like most other bright eyed, bushy tailed novices, I imagine. Not exactly a sound business plan.

But I can do you, dear (imaginary) reader, a favor: if you have somehow stumbled across this site in search of answers, and you are an aspiring writer, I can tell you this, in all honesty and humility: get your behind over to kboards, The Passive Voice, or Dean Wesley Smith's site and take a gander at what they have to say. Smith in particular seems to have his head screwed on straight. I think he may actually be a real person too, which is nice to see on The Internets.

Oh yeah: I've now done the free book promo deal. Yessir: moved about 1,400 copies, which is pretty good, all things considered (people don't know me from a stranger standing outside their window late at night). Don't know if that will lead to reviews or not. We'll see. That was the primary objective, but it's not something I have any control over.

Something I can control: wrote a couple short stories set in the Thraxverse to put up in the wake of the freebie promotional blitz. Got one up on Kindle now for 99¢: Future Fossil, a Magnum Thrax Short Story. I think it's fun, wild and whacky and just plain crazy, but YMMV.

And that's about it. I'm pretty happy with my due diligence in regards to my book and efforts to get the word out, even if my advertising banner campaign was utterly inept. I compared myself to Douglas Adams, which just the kind of outrageous and dubious claim real marketers might make. Take that, internet curmudgeons! Sadly, cheeky ad banners don't work.

Now I face a dilemma: do I write more in the Thraxverse, or try something else? Like, say, standing outside windows, or randomly washing motor vehicle windshields at intersections? Perhaps I will try and build a functioning spacecraft out of macaroni (see if anyone gets THAT reference).

Without much in the way of feedback, it's hard to say. I had fun writing the book, imagining a whacky future reality and a creating a slew of off-beat characters.

May be time to zig rather than zag.