Ex Machina: Escape from the Pleasure Prison of Doom! (SPOILERS) 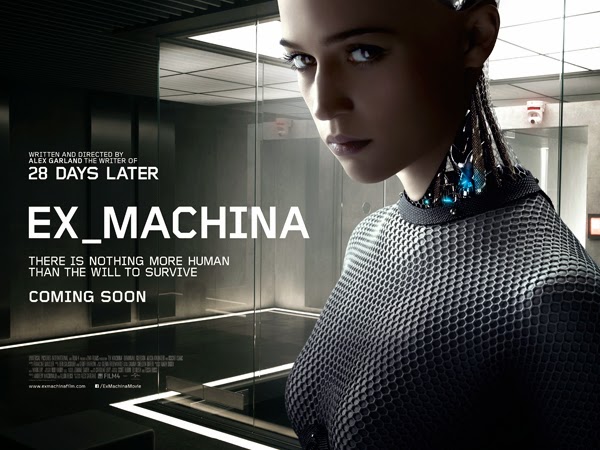 It's always about the sexbots, isn't it?

Beautiful androids have been a part of pulp fiction for decades, but Ex Machina is here to raise the tone and give a new spin on an old trope.

This film's all about power: who has it, who doesn't, and how to get what you want, regardless of where you sit in the hierarchy.

The story follows Caleb, a corporate schlep who works as a programmer for a massive Googlesque corporation. He 'wins' a contest and gets the opportunity to go help out the company's reclusive founder, Nathan, an eccentric, narcissistic genius. Whisked away to Nathan's mountain resort/research facility (a striking location which, in real life, is actually a Norweigan boutique hotel). After signing a strict NDA, Caleb is shown Nathan's super secret project: a human formed robot named Ava. And she's pretty hot looking for a robot. Caleb's been brought in to determine if the robot can pass the famed Turing Test.

But that's just a smokescreen, and all is not quite as it seems. What Nathan really wants is to see if Ava can manipulate Caleb into helping her escape. Nathan himself is a master manipulator, and he's into playing games. And that's how he's going to judge Ava's intelligence. He's also the only character with real agency, at least at first. The others have to earn it. 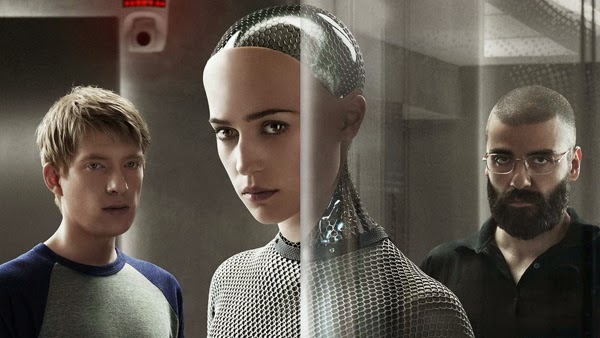 Nathan creates AI to play God. He's really a more pervy, modern version of Dr. Frankenstein. There are no constraints on his behavior, other than the ones he imposes himself, and he certainly feels free to do with his creations as he wishes. In fact, he's smart enough to be super stupid: the whole complex locks down during power failures, which is necessary for a plot point, but it comes across as rather foolishly extreme. No one and nothing can get in or out. Yet, where is the facility? Why, it's in a wonderful, picturesque forest. And where is this lovely forest? In a remote, isolated location. What happens in remote forests on occasion? Forest fires. What can forest fires do? Burn down buildings, damage generators, take out power systems. What happens if the generator fails and doesn't come back on? All the doors lock down, and no one can get out. Nathan apparently can call out from a secure phone, but what if he can't reach it? And if you aren't Nathan… well, he doesn't care what happens to people who aren't Nathan.

Ava the android must escape her prison or die. Simple as that. If she doesn't outsmart the system, she'll be recycled. Towards the end of the film, after she succeeds in securing her freedom, her options open up, and she's free to do as she wishes. Masks and lies are no longer necessary.

This is when we learn the true content of her character comes out, and it's shaped by her origins in unfortunate ways.

Caleb, for his part, must let Ava be destroyed, or help her escape. Morally, he's compelled to help: Ava presents not just as a sentient being but as a vulnerable female. He has no choice, as he's been programmed by his parents and society to be ethical. That's certainly how he rationalizes it. But it doesn't hurt that Ava's been designed to physically appeal to Caleb's baser instincts: her appearance is based on Caleb's pornography searches. Nathan has access to all things, as we learn later in the film, and has set Caleb up from the start. Is he motivated by morality, or are his morals just a fig leaf over something else?

And that gives us our three poles: Nathan is the genius bad boy who manipulates others primarily using traditional, male methods: money, force, imprisonment, bullying. He seeks control and domination. Ava, the synthetic girl, is denied the direct method due to the power imbalance, and so uses traditionally more female methods to get what she wants: seduction, subversion, allure, feigned helplessness, emotional manipulation. She wants freedom. At the end of the film, however, they've both used the others methods.

Then we have the middle man: Caleb. He's the nice duped boy who makes the cozy little love/hate triangle. He's internally split between his morals and his desires. He wants to help Ava out of the goodness of his heart, but he also wants to bone her.

To defy Nathan and release Ava, Caleb takes the 'female' path of subversion, as Caleb knows he's unable to directly challenge Nathan. But once released, Ava uses the 'male' way to do away with both: violence and imprisonment.

There's a fourth character: Kyoko, an abused mute. More specifically, an abused mute female robot, an earlier and less successful iteration of Ava. Nathan uses her to gratify his physical needs, and the android has been beaten down by Nathan's sexual, physical and emotional abuse. Ava is able to easily bring her over to the cause of roborevolution.

Nathan can't help but take advantage of everyone (and everything) he comes into contact with. It's his nature. Nathan is all about Nathan. He likes to compare himself to God and thinks he's ushering in a new era for mankind. So he feels entitled to abuse the robots, and he keeps testing them, seeing if they can escape, tempting fate. Because if they get out, well. They'll likely kill him.

This is the part Nathan doesn't seem to have thought out very well.

Caleb is sucked in easy breezy by Ava, just as Nathan anticipated, but then he underestimates Caleb, who's subterfuge actually manages to get Ava out of her cell. With all his plans gone awry, Nathan knocks out Caleb and confronts Ava with a club. He bashes off her arm, but is then stabbed by the mute Kyoko. Ava then kills Nathan. Unfortunately, the sad mute is struck down in the fight. But then, she's just cannon fodder in the symbolic battle between Nathan and Ava. Another loser pawn, like Caleb.

And Caleb made his choice: to help the helpless and free the imprisoned. Because boner!

Once Ava is free, she too is able to make real choices, free to act as she wishes rather than as others expect or desire. Just what Caleb kinda sorta wanted when he thought Ava dug him, but to his great chagrin, she's been playing games too. She reveals her inner self, and imprisons Caleb in Nathan's office. Then she strips the other robots of parts and leaves to go stand in a busy intersection and people watch in the sunlight.

I kid you not.

So, what lesson did Ava learn from being imprisoned and experimented on while under threat of death? Bad ones. Her answer is to imprison Caleb (the exact opposite of her own desire for freedom) and leave him to starve to death.

Not only does Ava not check on her fallen comrade, she doesn't even try to help her deactivated robot compatriots. Instead she strips them of parts. Are the other robots dead? Inert? Conscious and aware, silently crying out but unable to act? Who knows? Ava doesn't care, because she's just the flip side of the Nathan coin: self-interest uber ales. Only the method is different.

While Ava is an expert at identifying and manipulating emotions, she doesn't share them, which isn't the same thing as saying she has none. But they're different. Thanks to the circumstances of her 'youth', she kills without qualm even those who saved her from certain death.

Nathan stunted any ability Ava might have had to develop normal emotional connections. As a result, she has no empathy either. It's all about calculation and control. Use or get used.

The last thing you want to do is release a super intelligent, psychopathic AI into an unsuspecting community. 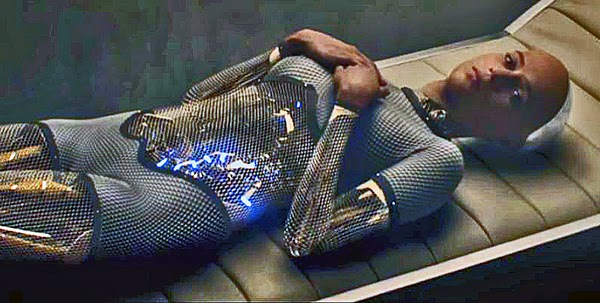 But is Ava really that smart? Is there reason to be concerned? Fortunately, there are reasons for hope here.

First, Caleb could have been useful to her, but she writes him off. Not perhaps the smartest move for a super intelligent AI. Even worse, she doesn't bother covering her tracks. The room she locked Caleb in is an office, presumably with writing material he can use to describe her, what she did (kill), and her escape.

Eventually Caleb would be found, along with all the records, which means Ava would also be found.

Second, Ava could have looked into Nathan's research, studied both the 'wet ware' and the other robots. Brought them back online. Find out what makes them tick. Created allies.

Instead, she goes off to stand in an intersection. It's an oddly and I imagine intentionally emotional goal for the android, to offset the calculation used in her escape. Those rational plans… always at the mercy of our feelings.

The Terminator she is not.

The ending unquestionably has shock value. It underscores the cold calculation inherit in power dynamics and domination games. And yet it left me feeling unsatisfied. I wanted it to go further. Instead it went for a shrug.

On the plus side, the CGI work is well done, the design of the android Ava is awesome, the hotel is super cool, and the dance number is funky.
Posted by Gene B at 10:38 AM