Doctor Who: The Magician's Apprentice Review 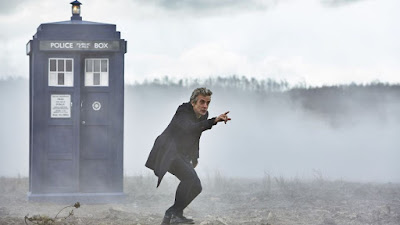 Doctor Who has always been a bit daffy.

The television equivalent of what you'd get if you merged the local cat lady with a hyper-active five year old and a mad conspiracy theorist, and then irresponsibly pumped fifty cups of coffee into your new, three tongued hydra.

It's wonderfully entertaining at times, but doesn't make a lick of sense.

Which brings me to The Magician's Apprentice.

I'm not the target demographic for this show. Not by a long shot. I probably shouldn't even be watching it. Which may explain why everyone else loved it while I sat gob smacked.

The episode did cause a memory to gurgle out of my grey matter. That's right: my brain gurgles. A memory I acquired from an article some time ago, in which the Doctor Who showrunner said emphatically that one should never indulge in fan service, as it alienates the broader audience.

Presumably this is a different show runner.

The season opener connects back to an episode filmed some forty years ago, and even includes actual footage from it. Hello, Tom. An ethical dilemma is presented to the Doctor: would you kill a boy if you knew he would grow up to be totally evil and kill millions? It's the old time travelers' kill Hitler ice breaker question.

Probably used as a pickup line in time traveler bars.

And the pre-credit opening was very good. Just cracking, really. Superb. I know enough about the program I wasn't lost when they dropped the name 'Davros'. A cool twist, no question about it.

And then the episode goes flying all over the place, throwing scenes at the walls as if someone gave the Attention Deficit Disorder writer a bag of jelly beans and a gallon of coke.

It was zany and over the top over the top, doubly so, even. There's a tank and a guitar and stopped planes (in midair) and snake men and invisible planets and all kinds of batsh*t crazy stuff.

Michelle Gomez eats it up with a little silver spoon and oodles of panache. As Missy, she steals the show, the silver ware, and probably all the towels. She's completely at ease in her psychopathic, mass-mudering character, and has an absolute ball.

Peter Capaldi, on the other hand, is much stiffer. Maybe Gomez excites him. Who knows? She tickled the balls of the Daleks. So cheeky. Anyway, I've enjoyed Capaldi elsewhere, but here, on Who, he's tightened up. It's almost as if he cares too much. I keep feeling like I'm watching Peter Capaldi acting, which is not how I've usually felt previously when he's been in front of a camera performing. It's odd. Perhaps it is the material they're giving him. I don't know.

So much of the episode made no sense. The guitar bit felt like excessive turkey stuffing, although the frozen planes I can forgive Because Coolness. Yet I think Missy could have found Clara without them. The invisible planet? Seems a lot of trouble when they could have just shut the windows on the spacecraft, or put a bag over his head. There are cheaper solutions.

Generally I approve of wildly over the top excess. But here… I'm not so sure. It seemed to detract from the flow of the story.

Moffat is endlessly clever, and quite the wit, but his stories always feel glib and choppy, prone to hop about from here to there and back again, like an itinerant Hobbit on speed. The opening scene alone is worth the price of admission, but after that, the energy started to dissipate.

The trailer for next week, however, teases wonderful moral conundrums for our dear Doctor, enough to make him scarf a bucket of Jelly Babies, although I still have qualms. Why The Doctor bothered to confront Davros the way he did felt to me more like an action foisted upon him by a writer interested in exploring an interesting conundrum than something the Doctor would actually do. It needed more buttressing for me to buy it.

We are in this to be entertained, so much can be overlooked or forgiven or memory holed, and I am intrigued enough to see how it plays out next episode.

Can Moffat rise above a pat ending and deliver something superlative?

A cherry for a forty-year old cake?