Doctor Who: The Witch's Familiar 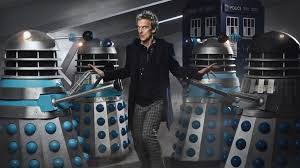 Wanted to like it. I really did. The episode riffs off of one of the best episodes of the original series, and promised to be a strong chaser.

There’s a lot of sound and fury, and then it just doesn’t bother to deliver.

I liked the explanation of the teleportation fake-out that Missy pulled, and the flashback to an earlier, untold Doctor story. That was fun.

The episode looks great. Really freakin’ amazing (with a few exceptions. See below). The Dalek control room is fabulously realized, and looks like a cross between the 1960s Andy Warholesque pop art Dalek feature film sets and those of Ken Adams.

The CGI exteriors of Dalek City rock, and are embellished with tiny little flying Daleks zipping about willy nilly, making for a nice FX cherry top. The show has come a long way from the closet of styrofoam and cardboard. Well. A lot is still probably made with those materials, they just hide it better.

Speaking of which, the required hallways are appropriately repetitive looking. Really evoke an earlier era, especially the retro Dalek doors. Who knows? They may catch on.

Missy (Michelle Gomez) is crazy wonderful. She dominates every scene she’s in the way Kramer kicks ass in karate class; I can’t take my filthy eyes off her. She makes the Doctor, Clara, and even our dear desultory Davros fade into the scenery. She’s got the best material to work with, the most outrageous lines, the loosest rules, the most idiosyncratic costume, and she pushes it all to the limit of what’s acceptable in a former children’s tea time show.

The way she determined the depth of the pit… brilliant.

Her final effort to get Clara erased was the pinnacle of her performance, and it at least gave Clara something to do, even if ineffectually and while imprisoned in a can.

The concept for the episode, having the Doctor trying to rescue a child only to discover it is his greatest enemy, is a wonderful one, and has a direct link back to Genesis of the Dalek and a quote by the Doctor himself. What a cracker idea to base a story on! So many places it could go. Such potential!

But it isn’t realized. And that’s a shame.

There’s some sharp witty dialogue, mostly had by Missy.

Capaldi’s eyebrows are in fine form.

The final bit where he saves kid Davros was kinda sweet. And the hand mines were cool.

I still feel Capaldi’s stiff. That’s a minority opinion, if not outright heretical: the man’s won an Oscar, after all. Granted it may not be entirely fair an evaluation: I went back and looked at some clips from Genesis of the Daleks and those episodes are much more like a stage play than I had recalled (with the sort of sets and props you’d expect from live theatre). The actors over enunciate and there’s a formal, Actor Acting aspect to it at times. Still, I find Baker better inhabits the role than Capaldi. He’s more believable, or was in his early years at any rate. Perhaps Capaldi just needs a drink before going on camera, or material better suited to his own temperament. Let the real Capaldi shine through, drop the artifice, go more Gomez.

Poor melancholy Davros Loman is a real downer. He could do with some pharmaceutical pick me ups, if you know what I mean. Maybe Prozac and some therapy. The evil creator of the Daleks is dying, his fire has gone out of the universe, and he’s gotten deadly dull. No megalomaniacal screeds here, just the pathetic bleatings of a green half-man with a blue eye stuck in his forehead.

So when the Doctor turns the tables and it is revealed he didn’t buy into Davros’ little deception (and I use the term ‘little’ here deliberately), it comes as no surprise whatever. The big surprise is that Davros has so little emotional intelligence that he thought his scheme would work in the first place. It’s entirely out of character for Davros, who was once a canny operator. He seems to have gone senile as well as soft.

The scenes of emotional, death bed connection between the Doctor and Davros rang like a cell phone on mute. Seemed false and forced and what was I watching? Who did they replace Davros with, anyway? I knew Davros. Davros was a favorite villain of mine, and you, sir, are no Davros.

Sadly Clara fades so far into the background during the episode she might run into Captain Kirk in that episode where he’s always fading away into another reality. They really short changed her character this time around.

The Dalek zombie sewer slime came across as both odd and jarring (Is it a reference to Aleksandr Solzhenitsyn? He once referred to the Gulag as a sewer system). It’s such a goofy, nonsensical idea you know immediately it’s there to solve something later in the episode, and lo and behold, it does. How convenient. And to be honest, clever in a what are they smoking at the Beeb these days kind of way. And yet the effects used for the slime attacks are retro and highly evocative of the original series. The foam used for Seeds of Death was more convincing, and that’s saying something, and it’s not good. They must have blown the budget on the city sets.

The Daleks are boring. God, they’re dull. I’m sorry, but they are. Boring and dull and incapable of surprises. At all. They just wobble about shouting ‘exterminate’ and wave their plungers ineffectually. They couldn't be duller if they were Dalek Accountants. In fact, those would be more interesting, as they'd have things to say about numbers and taxes. The Daleks just have no menace anymore. They can't properly kill people without them teleporting away, or deal with their own bloody sewage. I mean, honestly, the sewage gets the better of them.

True, they’ve tried over and over again to deal with the Dullness of the Daleks issue, in stories like Evolution of the Daleks, where they tried to hybridize their way out of the dead-end plunger yank-fest. But it always goes back to the same interminable status quo.

The Daleks are less interesting now than when they first met William Hartnell. There was still a smidgeon of nuance around them in those early days. Now, they’re just one note pepper pots. Dalek dialogue feels so limited you could take bits from other episodes and cobble together all the responses you’d need for a slew of new episodes.

That’s how limited these tin cans are. No range at all.

They're almost background elements, like fire hydrants or trees.

Brilliant idea and concept, of course, but they need room to grow. That or they should be retired until someone can think of something, anything, interesting to do with these perpetually peeved hate machines.

Or does the Terry Nation estate prevent any meaningful alterations to their nature?

Or perhaps they really are setting up a new threat, one that will replace the Daleks: Doctor Who and the Unstoppable Undead Sewage.

I confess I don't see the toy potential.

The Doctor says he went to see Davros because ‘you asked’. But he runs away and hides in the Thirteenth Century, throws a three week farewell party, hides from Mr. Snake and expects to die and has no hope. So… all you have to do is ask? Does guilt over not saving kid Davros’ rot his soul that much? The Doctor’s done a lot worse over the years to a lot better people. I just found this death wish because 'Davros asked him to’ made no emotional sense. Of course, the Doctor lies. It still doesn’t make sense.

That’s all I have to say about our good Doctor.

I should love this way-out-there, whacky program, what with its brilliant premise and history and admirable British eccentricity. But I’m not. The show is just not connecting with my inner eleven year old.