In Defense of Zombies 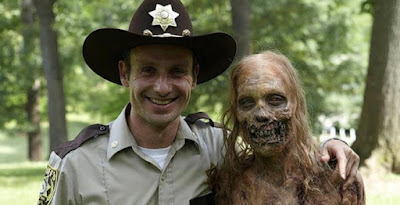 Zombies tend to be silent types at the best of times, so when their reputation is maligned by elites, they just aren’t able to defend themselves. This is particularly true of criticism appearing on the internet.

And so it falls upon others to defend their reputation from the wanton calumnies that percolate online.

For you see, lately, smug internet pundits have been bleating on about how the real danger in The Walking Dead franchise is other humans, not zombies. You know, because man is his own worst enemy, blah blah solemn wisdom blah. I take the point, especially on a thematic level, but come on: in the end, this is an overly simplistic cliché that’s been pushed to the point of absurdity.

The time has come to stand up for our humble, bumbling zombie friends. They may be unassuming, slow, uncoordinated, even brain-dead, but they still have it where it counts when it comes to collapsing civilization into a smoking ruin.

The zombie doesn’t brag. They're above that. They're brain-dead. But then, they don’t have to brag: their work speaks for itself.

First, without zombies, there wouldn’t even be an apocalypse in the first place.

How many people tried to eat your face off on your way to work this morning? Are 99% of your friends and family zombie chow? No? Isn’t that odd. After all, in the real world there are a lot more of those dangerous human things than in The Walking Dead. It’s populated mostly by zombies.

I wonder how that happened.

Me? I'd rather sit in a cafe populated by humans, rather than undead flesh eaters, but that's just me.

Typically, a war kills a very tiny proportion of the overall population, and most die due to disease or famine that are side effects of the fighting, rather than in actual combat.

Yet the lowly zombie, in short order, kills off 99% of the entire population of the planet. And they do it by biting. Up close and personal every time. No atomic bombs, no guns, no knives, no carpet bombing. No nerve gas, no gas chambers.

The death toll of the Second World War is between 50 and 80 million, spread over five years. And that’s using every weapon humanity had at its disposal, from machine guns to a-bombs.

Zombies? They kill SEVEN FREAKING BILLION in a quarter that time.

I can't emphasize that enough.

That's like making a suit of power armour in a cave using spare parts and an old blow torch.

Many humans would die from disease and starvation, as transportation and supply networks collapse, but the show never covers this. And the disruption is caused by our modest zombie masses, anyway.

So I ask you: which is more dangerous? Human or zombie?

So let’s all show our putrifying undead friends some well deserved respect.

Sure, the living could unleash nuclear Armageddon at any time. Send 70,000 nuclear warhead tipped missiles criss-crossing the globe to blossom and burst. But we haven’t. And it isn’t even looking likely.

Maybe if the characters in The Walking Dead decided the real enemy was, oh, I don’t know, the freaking zombies, they wouldn’t be on the brink of extinction.