The Martian vs. Interstellar vs. Gravity vs. Prometheus 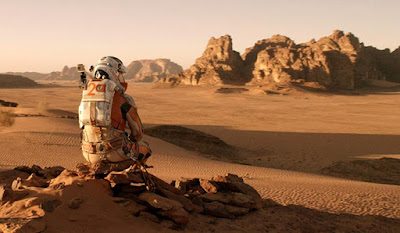 The Martian, based on Andy Weir's book, is about a paper thin character and his struggle to survive after being abandoned on Mars. He does so by eating potatoes grown in his own shit and using copious amounts of duct tape.

Basically, it's MacGyver in Spaaaaace.

I'm being facetious, of course.

Weir heavily researched his book, and everything in it is plausible. That Andy Weir researched all this in the first place is, and worked it into a novel, is impressive. That scientists figured out everything for Weir to research is even more amazing.

Human beings can do such miraculous feats, like going to other planetary bodies (we've already reached the moon). It just makes me think I must be part of a different species. The characters in the film are fictionalized versions of all the very smart people down at NASA.

The film spends a great deal of time on Matt Damon 'sciencing the shit out of' his predicament. Which, initially, is pretty cool. He grows the aforementioned potatoes, for example. He co-opts an older probe. He uses radiation for heat. And so on.

The only thing they don't spend much time on is the human element, and without interest in him as a person, interest in his situation wanes as the film drags on and piles on disaster on top of another.

He has no love interest, for example. No close friends. His parents are mentioned, once, but he seems in no hurry to speak to them. They are not invited to NASA to view his return, or to write to him, or, well, anything.

They cover his relationships with his coworkers a little, but it never goes more than puddle deep.

It could so easily have been different.

The human element here is mostly, if not entirely, afterthought.

Gravity takes something of the same approach. We start with the disaster, so there's little time to flesh out Sandra Bullock's character. But that's less of a problem here: she has George Clooney to play off of, and the film is really an IMAX roller coaster ride in space. No need for rumination. Because lookout, space debris! Gravity isn't a deep film, and doesn't pretend to be. That's not the genre.

The Martian, on the other hand, had potential to be far more affecting emotionally than it was.

Castaway got to me. The Martian never did.

Interstellar had dodgy science. Three habitable planets around a black hole? Where was the light coming from? One hour on the surface is a year aboard the ship? Say what? What would that mean for satellite TV reception?

My monkey-brained understanding is that, even with a 'perfect' star like ours, Venus is too close, and Mars too far away, to support life. We're in just the right spot. It can vary a bit, but not much. The idea of finding three planets with stable orbits around a black hole seems… unlikely. But hey, I'm no scientist.

It scarcely matters: if you put the science of Interstellar aside (and I only bring it up because I was told so often how accurate and real it was), the film is much more enjoyable. They establish an emotional connection, and background, between the protagonist and his daughter. Love is at the centre of the film. Powerful, primal emotion the viewer can connect with. It has a heart, however overwrought.

The Martian's heart barely beats. It's more like an episode of Nova or something.

Gravity felt like a realistic portrayal of a disaster in space, as far as Hollywood goes. The rapport between Bullock and Clooney sold it for me emotionally. Especially Clooney's seeming sacrifice, and unexpected return. They managed to make me care enough that the action sequences, and Bullock's fate, mattered.

By contrast, the lack of emotional depth in The Martian made the film a long, slow slog. There's a great bit with the Council of Elrond, and some clever and funny lines, but it needed more than cleverness. There's no looking into the empty void. No real anguish at being abandoned. He doesn't plumb the depths, he's too practical, so when he rises at the end it doesn't carry much emotional heft.

You just don't give a shit.

Some critics are saying The Martian is Ridley Scott 'returning to form' after the disaster that was Prometheus. I saw that film: it was gorgeous, creepy, and well cast, but didn't make a lick of sense. But you know what? I'd sooner watch Prometheus again than The Martian. I was never bored watching the former, while the latter made me shift in my seat and look at my watch.

Yes, I still have a watch.

Prometheus has characters who are interesting basket cases. The engineers are cool and mysterious. The android is ambiguous in intent. There's a lot going on to look at and absorb. It's a mess, honestly, but it's an interesting mess.

The Martian, on the other hand, is a slighter offering, despite the science. Despite the realism, or perhaps because of it, the picture was boring.

That's a cardinal sin for a piece of entertainment.

It should be mentioned that the climax is pulse pounding and I got caught up in it, but getting there was far more painful than it had to be.

Ultimately, The Martian just raised my opinion of Interstellar, Prometheus, and Gravity (although I already had a high opinion of Gravity).

Is it time to let go of plausibility and embrace the universe altering power of love?

Just remember to bring duct tape.
Posted by Gene B at 6:14 AM