Sci-fi Overdose: The Martian, Doctor Who, 12 Monkeys, Fear the Walking Dead, and Rick and Morty, etcetera... 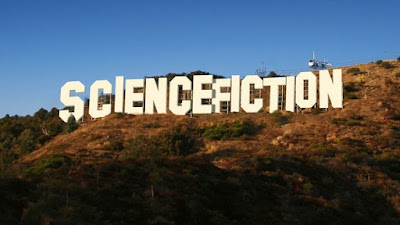 At least, that's what I tell myself.

But you can have too much of a good thing.

Since starting this blog, I've written more about science fiction than, well, ever. Not only have I watched and read sci-fi, I've thought and written about it. I've stuck with some shows longer than I would have with the intent writing reviews.

Now I've got sci-fi overload. Time for a break.

Why? Things are bugging me that arguably shouldn't.

The Martian, for example. Thought it a super smart snore, even though the ad hoc science was awesome. People can do such wondrous things. Should have liked it. Didn't.

Jurassic World? All the spectacular visuals and none of the smarts of the original.

First several episodes of the new Doctor Who season? Didn't like them, either. Viewership for the show is falling (it may not come back next year for a full run as a result, just a few specials) and what are they doing? Fan service and convoluted plots that alienate casual viewers. The whole franchise is spiralling down into a black hole of self-reference.

The Before the Flood two parter had a much more appealing pace, and even gave the guest actors room to breathe and develop. There were some nice, creepy moments, too, but overall, it felt flat.

The episode depends on a gullible Pull-My-Finger villain, again, one ready to believe anything the doctor says, and so conveniently doom himself.

Someone should make a show: The Universe's Stupidest Space Invaders. 'Monsters' might be more appropriate, but 'Invaders' is catchier. Every week they'd show a bunch of alien morons who try and invade earth, only to be killed by dirty telephones, get eaten by a small dog, defeated by love, or vanquished by their fatal water allergy.

For over 50 years, Doctor Who has eschewed supernatural explanations, preferring (pseudo) scientific ones. 'Demons' would invariably prove to be aliens. Supernatural powers would turn out to be super science. Yet in the last two-parter, the show had ghosts. Not disembodied 'consciousnesses', or rogue information waves, but actual for realsies ghosts. Souls. Weaponized souls, in fact, turned into homicidal puppets by three written symbols.

That has major ramifications for Doc Who: if souls are real, where do they go? Are Heaven and Hell real now as well? Moffat seems keen on this question, and had a faux-Heaven (or was it Purgatory? Whatever...) last season, presided over by Missy. But that was the usual and expected high tech fake out. I don't remember any caveats this time around and it seemed out of character for the program.

Feeling ambivalent about Fear the Walking Dead. It's arguably sci-fi, set in a future affected by a fantastical virus. It's also pretty nihilistic. Standard for zombie fare, I suppose. The government is incompetent, the army malevolent and oppressive and untrustworthy to the point of cliche. Perhaps that is necessary to accelerate The Apocalypse.

Fear gives us a range of characters, from pacifist Travis on one end to ex-torturer war criminal guy on the other. Now, pacifism invites violence and is an extremist position that generally can only survive while protected within the body of The Leviathan, but contrasting it so simplistically against a torturer just feels cheap.

It's essentially Joseph Mengele vs. Ghandi, and in this universe Mengele is right every time. Because ya gots to do what ya gots ta do, it's a tough world, people are worse than flesh eating zombies, and squishy Liberal qualms will get you killed.

To nail the point home, Travis Gandhi McPacifist frees a young army soldier who was tortured by Salazar McMengele and whom the torturer is going to kill, to keep him quiet. The young man then comes back, and to underline how wrong mercy is, shoots not McMengele, but McMengele's hapless daughter, whereupon Gandhi abandons his ideals entirely and nearly beats the soldier to death.

Story beats like these, handled deftly, could be fascinating and thought provoking, illustrating how our moral choices are curtailed by difficult circumstances. But here it was delivered with the subtlety of a two by four to the head.

When I look at all the anti-hero trend on TV, it's putting me off: serial killers, brutal mobsters, sophisticated cannibals, charming psychopaths, and worse are the new protagonists.

Even The Doctor is more of a dick these days ('She cares so I don't have to'). And it's a kids show.

Refreshing at first, an antidote to preternatural Brady Bunch optimism, but the pendulum just keeps swinging out.

Non-fiction teaches us about the world. Fiction shows us how to live in it. Moral lessons are invariably imparted by the best stories. Consequences are revealed for evaluation, but it's better done with subtlety than a bludgeon, or stacking the deck so heavily it makes the audience groan. Studies have shown that reading stories can expand people's ability to empathize. Stephen Pinker credits storytelling with changing attitudes in Angels of Our Better Nature. But you need a deft touch. The Martian, for example, delivers a message about perseverance and hope and ingenuity and self-reliance, but it's not punching you in the face with it.


On the positive side, Fear has a tremendously creepy ambiance, and great action sequences.  like the actors and their acting choices. I especially like the actress playing Madison. She has a quiet intensity.

But there are character inconsistencies, too.

For example, a doctor in the finale calls for extraction of herself, her staff, and her patients to an airbase. The med station starts to be overrun by zombies before the choppers can set down, so they abandon the rescue operation. Shortly thereafter the doctor says there is nowhere to go, and commits suicide (off-screen, but heavily implied). Hello? Where was she going to be extracted to, just minutes earlier, if there was nowhere to go? The med station was overrun, but there was no word of the helicopter destination being compromised. That didn't change, so why doesn't her character try and go via ground vehicle? More dramatic to kill herself. Yet it doesn't make the slightest sense and should have been caught by a story editor. It's a minor thing that didn't have to stick out.

Too piddly a concern? Too minor a nitpick? Yeah, maybe.

I am looking forward to next season though. Because they're going to sea, which means pirates!

Fear the Walking Dead is Shakespeare compared to The Strain. Fun idea making vampires a sort of sentient virus / hookworm infection, but ugh. Stay away. It's gotten so bad it may one day be good for drinking games, but right now… not so much.

It's on the same level as Helix. I cut out of that after one season, despite the peppy soundtrack.

12 Monkeys surprised me. Thought they'd just drag out the original movie into an interminable multi-season slog that gets cancelled before the finale is ever reached. But it was an entertaining ride. Except, of course, for a weird character change midway through the season that didn't work. They say they set it up. I don't think they did.

That was just weird.

Not every show can be Mr. Robot: the characters here are so strong I'm on board no matter how bat shit insane the twists are. And they are cray-zee. This program has some seriously powerful writing, bro, and the acting is beyond top notch. Don't even recognize the actors, other than Christian Slater, but I expect to see plenty of them in future. The cinematography and wild, off centre framing, the score, the twisted characters… all superlative. The pacing is perfect, not needlessly frenetic. I'm learning a lot just watching the show. It's not for everyone, but give it a whirl. You may just like it. But it isn't SF.

The real and for true sci-fi program I'm enjoying at the moment is Rick and Morty. It's acerbic and cutting and endlessly cynical, but has the saving grace of being devastatingly funny.

Penny Dreadful, The 100, and Game of Thrones are all darkly brilliant, but they're on hiatus, and only one is really SF.

There's a big divide between being a consumer of fiction and a creator of it. As a consumer, I feel free to criticize and analyze, but as a creator, much less so. I know how hard it can be to create something, never mind something great.

On the one hand, TV shows have editors and writer rooms of talented people and resources to boot, so you expect a lot. On the other, they are working within tight timelines with restricted budgets, limited control, and under intense pressure from multiple directions.

As a wannabe writer, who the heck am I to judge?

So I'm taking a break from my amateur movie and TV reviews before I become more dyspeptic.

Books are another matter...