I wrote this Magnum Thrax short story as an action piece. In hindsight, it may have a bit too much action. Live and learn. The story's set in a satiric sci-fi trope fest, a post-modern post-apocalypse. I'll be posting some notes on the why's of Magnum Thrax after the story concludes. 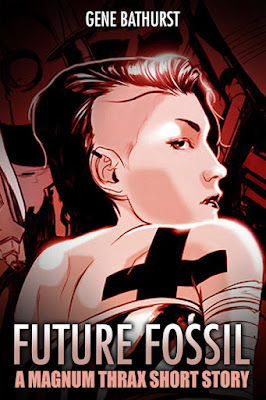 The leopard spotted tank raced across the searing hot salt flats, pulling a train of wagons loaded with oak barrels. A large, Vegas-style sign spun atop the turret, emblazoned with ‘Pleasurepit Five’ in neon pink.

The vehicle slowed as it approached a rock formation that jutted out of the salt ocean. Their it paused for a moment, engine revving.

The ruin of a big purple transport rig lay forlorn in the sand to the right. The front windshield was shattered, and the glittering purple paint was streaked by ragged claw marks.

Far above, in the crystal blue sky, advertising clouds drifted, shilling products that hadn’t been made for a thousand years.

The tank's cupola swivelled towards a cleft in the rock to the left, wide enough for a vehicle. There were signs on either side of the entrance, promising water and goods for gold, and death for those who couldn’t pay.

The engine roared. Greasy smoke belched from rusted exhaust pipes. The tank charged up into the narrow passage, clipping the sides of the granite canyon. Sparks and stone chips sprayed out form each impact as the tank raced recklessly forward.

Several harrowing hairpin turns later, the metal beast pulled out of the canyon’s cool shadows into a gloriously sunlit sand cove. The walls were lined with stacked, makeshift residences constructed out of salvaged materials looted from ancient buildings. Along the north face, cog wheels mounted on steel supports suspended a rickety freight elevator over a thirty-foot wide hole in the ground. Above it was a wooden sign that proclaimed, "Welcome to Utan Oasis."

The top turret hatch popped open, and an impossibly good looking man stuck his head out, with a full head of glorious hair, sharp cheek bones and square jaw. Obviously genetically enhanced. He wore wrap around sunglasses and a Seventies-style white disco suit that never, ever got dirty.

His name was Magnum Thrax. He was eighteen and he still had zits.

Thrax swore. It’d been a week since he’d last had radio contact with his friend. He bit his lip and scanned the compound.

No one in sight.

Dust blew. An unsecured door clattered in the wind.

Thrax tapped the tank’s top with the butt of his rifle, and hauled himself out. “C’mon, ladies. Time to play hide and seek.”

“Hi Mr. Thrax; no sign of your friend, then?” asked one wearing classic Iris van Herpen boots. She wore a white armband with a red cross on it. Thrax struggled to remember her name. Candy. That was it! The team medic.

“Nope, nada. I gotta find him,” proclaimed Thrax, roughly running a hand through his hair. "I just gotta!"

Candy scrunched her pert nose and gave him a confused look. “Eastwood?”

“Thrax's gun,” explained Kitty, leaning over Candy's shoulder. She squinted up at Thrax, who was backlit by the summer sun. “You and that stupid magnum. Who names a gun, anyway?”

Thrax bristled. “Everyone names guns. It happens to be very common.” He looked to the others for confirmation. “Am I right? Like naming a sword, or a hat.”

Kitty shut off her mobile entertainment unit and slipped it into her back pocket. The latex sucked it tight to her skin. “It’s still dumb. And we’re here for the zinc load, not Kal, and not your gun.”

“Wait.” Thrax was still hung up on the naming thing. “I seem to remember it was you who named the tank, ‘Big Bad Bitch’.”

Kitty gave him her zinger look. “Well, yeah. It’s a tank. Anyway, Kal should never have gone ahead in the first place. That’s his bad move and he should suck up the consequences. We just need to find the zinc for our reploboxes and split.”

Thrax ignored her and pointed at the tallest, most regal of the androids, his squad sarge, Andromeda. “Andy, take Sister Cinnamon and check the church. Could be a, you know, service or somethin’ goin’ on.”

“Yessir!” Andromeda levelled her weapon and headed off, followed by Cinnamon. Their six-inch high combat boot heels scuffed up dust as they skittered sexily away.

Thrax scanned the otherwise empty compound. “Where are all the Utans?” he muttered. The place was usually crawling with the ugly fellas. He lit an atomic cigarette, took a deep drag, and hopped off the tank’s hull. If the residents weren’t in church, in bed, or at work, they'd be drinking, belching, and barfing in Betties’ Norstar Bar.

He strolled towards it, puffing on the glowing green atomic cig.

Three androids, Kitty, Miss Jade, and Thumper, spread out and followed behind him, weapons at the ready. Candy stayed with the tank, which was just as well. As a medbot, she wasn’t a fighter.

Thrax leapt up the steps and barged inside.

He wished he hadn’t: the stench of decaying flesh inside was overwhelming. Bodies were strewn all over: sprawled over tables, on the floor, or disemboweled where they’d sat. Entrails were smeared on the bar. Thrax spat out the cig and covered his mouth with a handkerchief. Working quickly, he walked by the bodies, checking faces.

Kal wasn’t among them.

Bile rose in his throat. He began to gag, and there was no stopping it.

He stumbled out, vomiting as he went, adding to the colourful crimson mess. As he stood panting and trying to recover his equilibrium, he noticed that the door and surrounding corrugated metal sheets were riddled with bullet and energy bolt holes.

Thrax heaved up more food bits. The sun beat down on his back as the last remnants of his lunch splattered over cracked wood boards. He sighed, wiped the drool from his lower lip and straightened up.

The team was standing before him, expressions of disgust written all over their pretty faces.

Well, screw’em. Who cared what a bunch of synthetics thought, anyway?

He jerked a thumb at the bar. “All dead.” Drinking at Betty's would never be quite the same again.

Dammit, thought Thrax. Kitty was right: like the androids, Thrax wore an invisible, full body nano-suit that protected him from radiation and contamination. But it was on manual. With a thought, he activated the auto-defenses. Next week he’d get one of those virtual avatar assistants to keep track of these things. Maybe the Monroe AI model. She had a sexy voice. “Okay, olfactory sensors blocked. Now: Kitty, Miss Jade, I want you to sweep and clear. Hostiles could still be here. Thumper, you’re with me.”

“Wait, hold on there, kiddo,” groused Kitty. “You're sending me with Jade? You know she’s the newbie, right? I just don't think that’s happening, unh-unh.”

“Shut it, trooper,” snapped Thrax, regretting that he’d sent off Andromeda, his squad sergeant. It was only his second mission, though. He'd just turned eighteen, so Kitty-Big-Mouth wasn’t about to acknowledge his authority without a fight, despite Thrax being rated fully human, and then some. He had good genes. Amazingly good genes, as a matter of fact. Everyone in The Pit knew it. Meanwhile, her android code was dodgy. These androids weren’t military grade, just sexbot models repurposed for combat by self-taught coders out of pure desperation. They were the defenders of Pleasurepit Five Sex Emporium, the last bastion of human civilization. It wasn’t a great museum, or a university, or a monastery. It was just a sex emporium.

Thrax wondered if that was ironic.

“Bad enough I’m here at all, and ya’ll know it, too. I was supposed to be guarding the grain silos back at The Pit. No way I'm going with Jade into some monster buffet,” said Kitty defiantly, doubling down. “She's a desk jockey, and she never shuts up, either. Give us totally away. No offence, girl.”

Miss Jade bristled. “Seriously? That… that is totally unfair. I earned the right to be here. I studied combat manuals for weeks, and I completed all the basic firearm regulation and maintenance simulations.” She tugged her micro mini dress down and smoothed the plastic. “I happen to have been going over mission relevant background.”

Jade shrugged and looked at her immaculately buffed boots. “I wanted context.”

“Whatever,” groaned Thrax, bored of their bickering. He reached over and snapped a switch on Jade’s bulky laser rifle. “It helps if you turn the safety off.”

Miss Jade blushed beat red. “I knew that, Mister Thrax, I was just diligently waiting for the right moment. And, point of fact, regulations specifically state that weapons should be kept on safety until–”

“Oh, bull, girl!” Kitty got in her face and wagged a finger. “Regulations get people killed, ya know, which is why you shouldn’t be here. And why I’m not going with you.”

“Enough!” Thrax restrained the urge to pop an artery. “You two got your orders, I’m not changing them, so make the best of it. Go. Now!”

Kitty blew a gum bubble at him, then popped it. “Fine. Make ya feel big, does it?”

“And go left,” added Thrax. “Check the living quarters. Me and Thumper will check the warehouses.”

“‘Thumper and I’,” Jade corrected, prissily. “Precision in all things, Mister Thrax. Holistic nature of life.”

Thrax ignored her. Foxy librarian sexbots like Jade were extremely punctilious. Great at planning, and organizing your archaic book collection, but damn annoying in the field. And she was always trying to get him to read. Read! What era did she think they were in? No one did that crap anymore! If it wasn’t text in a video game, or on a piece of munitions, Thrax wasn’t interested. Reading was for old people. Everyone used neural taps, anyway. Jade’s saving grace? Her base model was the Foxy Librarian, so she followed orders and procedures, wasn’t nearly as annoying as Kitty, and had a head full of facts, figures and obscure knowledge, which came in handy at the oddest of times.

Thrax spat and trotted over to the first warehouse, followed by Thumper. It was a big ugly thing, mostly embedded in solid rock. He motioned for the voluptuous android to pull back the door. It slid easily on greased tracks.

Thrax scanned the interior with his weapon’s sensors.

No life form readings, and even worse–no zinc.

“You are soooo screwed, mission leader,” observed Thumper. “If you go back empty handed, they’re gonna–”

Thrax spun about, anger and expletives flooding his adolescent brain. He kicked the dirt and had a little spastic frustration fit. “Damn freakin’ fubarks!” he swore through gritted teeth, trying to keep his volume down. “So unfair!”

“So’s the lot of an android,” said Thumper dryly. Her model was athletic, rambunctious, and not very tactful.

But neither was Thrax.

Thrax took a few deep breaths and calmed himself down. Thumper had a point. “True. The humans at The Pit, all of us would be dead without you. We owe you androids everything.”

“Huh,” said Thumper, taken aback. She started to say something, then stopped.

“I just… don’t think any human’s ever bothered to tell me that before. Thanks. I always thought you were dicks.”

“Dicks? That’s what you think of your creators?”

“Well… I mean, yeah. It’s egocentric to create entire species who’s only purpose is to fulfill your sick, twisted, depraved fantasies. Honestly, the stuff with the plastic and the fish and those rings–”

“Okay, okay, I get the picture. No need for details.” His future was on the line with this mission. The Sex Emporium’s Grand Council of Elders, Protectors of the Ancient Enlightenment, had made that real clear. For an element so rare, Zinc was essential for their reploboxes to make vital equipment.

If he didn’t get that zinc, his ass was grass!