Game of Thrones: A Dance of Dragons 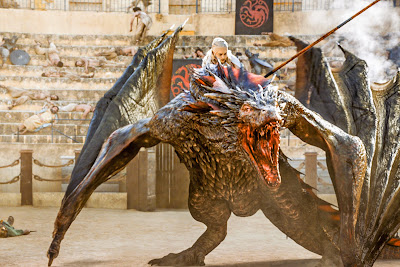 Stannis goes The Full Evil, and Danerys has a Kodak moment.

Both of these leaders have been struggling to balance their personal beliefs with the harsh demands of ruling the unruly.

Stannis, the stickler, often inflicts harsh punishments for crimes, and does so with unwavering certainty and not a jot of mercy.

He's been chucking his morals away ever since he met Melissandre, who brings out the brother-killing-heathen-frying worst in him.

The Onion Knight, the angel of his better nature, finally lost the fight for Stannis' soul last night.

His character has been struggling between light and dark for several seasons now, and he's been frequently leaning dark. Certainly more than his closest rival, Danerys.

Speaking of whom, she soared last night.

She climbed atop the back of her dragon and left her friends in the dust, to be murdered by the Harpies. Just kidding. I'm sure they're okay, even in the high casualty world of GoT.

Danny abolished slavery and imprisoned two of her dragons to prevent them from snacking on shepherd kids, but for the sake of social stability opened up the fighting pits again. She's trying to go along to get along, condoning and presiding over people hacking each other to death for her amusement, which repulses her.

That reaction would sadly have been atypical in the period we're looking at. Cruelty, torture, and violence were extremely common and accepted back then. People flocked to the Coloseum to see gladiators butcher each other, and animals tear criminals to pieces. Such games were enormously popular, and wouldn't be abandoned until the Christian movement began to take hold late in the era of the Roman Empire. Understandably so, as the Christians were often unwilling participants in the arena. By the time the more violent games were shut down, historian Matthew White estimates some 3.5 million people had died for amusement's sake.

G.R.R. Martin is well versed in history and myth, so there's precedent for much of what we see in Game of Thrones. Agamemnon sacrificed a daughter on the way to Troy. Royal brothers frequently murdered each other, just as Stannis had Renly killed.

All the sadism we're seeing is a part of human history, and we do a disservice to our modern times by forgetting how far we've come. If anything, Martin and HBO are holding back.

Thankfully they didn't actually show footage of Shireen going up in flames.

Surprisingly, it was her religious fanatic mother who broke down and tried to intervene.

Burning people at the stake repulses us, as viewers. A thousand years ago, it was a form of entertainment. People would bring their kids to watch people being burned or drawn and quartered.

Stannis has a tragic aspect, like Shakespeare's MacBeth. He's a man who started out with potential, and a conscience, and let it whittle away.

There's no going back now. He's done. Committed to the dark side. Dead in the hearts of the audience.

He's going to come to a very bad end.

Too bad he's not Anakin Skywalker. That guy was forgiven for slaughtering younglings and worse.

Danny, on the other hand, still has potential. Paired with Tyrion, we're looking at Team Projection. These two are the ones our modern sensibilities map onto best, and they, along with Jon Snow, will be the ones who drive the show home and win the day. Everyone else is expendable. Except maybe Bran, who's busy turning into a tree. Don't ask.

What interests me now is the horrible moral calculus going on. Mel insists that only Stannis can stop the White Walkers. Since he must triumph to save humanity, any sacrifice to that end is justifiable, or so she would claim

Of course, that's the excuse that every fanatic uses. 'My cause is just so I can commit any sin I like.'

It's for truth and justice and the Westeros way, after all.

Is Martin going to pull the rug out from under this narrative?

We know the Lord of Light, or something, bestows power upon Mel and that drunk priest who's always resurrecting the poor guy who's always being hacked to bits by the Clegane Clan.

Is Rhulor or Ruhlyr or whatever it's called really the one true god, or just another supernatural dick who's yanking humanity's chain around, like the White Walkers are? Are we just looking at two adolescent gods who happen to be jerks?

Wasn't that a Star Trek episode?

I know Danny will be there for the final battle, along with Tyrion and Jon Snow. Even that significant touch by Jorah, the absent minded douche, will not stop her from attending.

I doubt Stannis will, but if he does, he'll die there.

The most interesting question to me, as far as Stan and Mel are concerned, is the validity of her prophecy: is Stan really necessary to stop the Walkers, is all of it a lie? Did he kill all those people for nothing?