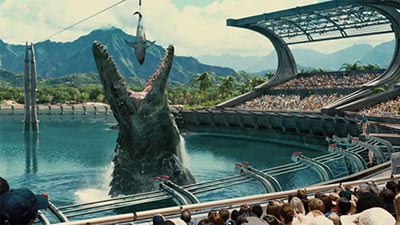 Jurassic World has them all.

Naturally, I had to see it.

I'm a fan of both Michael Crichton's original book and the first film. Crichton was a smart cookie, with an incredible imagination and insatiable curiosity. He dove into multiple fields, from economics to genetic engineering, nanotechnology, and the airline industry. Then he concocted stories around what he'd learned. Every book has an aside where the characters will slip into essay mode:

Bob and Ted take cover as the mysterious gunmen close in. Bullets ricochet off crates.

Bob: Dammit! Why are they trying to kill us over this DNA sample?

Ted: Well, Bob, it all started back in the 1970s, when biologists Allan M. Maxam and Walter Gilbert…

But he made it interesting.

Some people can't stand that sort of thing, and understandably so. I always found the background info he slipped in fascinating, and the story sugar coated the pill. He may not have gotten everything right (there's a lot of controversy around his book tackling climate change; he did have a contrarian streak) all the time, but he was never dull.

Even though Crichton had nothing to do with the film, I still had high hopes for Jurassic World. Surely they'd be able to build off his solid, high concept foundations.

The beginning of the movie holds much promise, and the loving Peter Jackson-esque pans over the park get your hopes up for the disaster to come. There are unquestionably great action sequences when it does: you can especially look forward to a rolling glass ball with the soft chewy children centre.

Some of the characters are annoying, true, but that's just makes it all the better when they're eaten.

Chris Pratt plays Owen Grady, the affable yet bad-ass Raptor Whisperer. He's got an easy going charisma that could easily carry an iconic character like Indiana Jones. Pratt's on his way to being a full fledged Movie Star, someone who can put butts in seats just by showing up on the screen. He doesn't need to act so much as show up and be himself, like Harrison Ford and Arnold have done to great box office effect.

The other actors are okay, but their roles don't give them many opportunities to shine. The billionaire owner of the Park, Simon Masrani (Irrfan Khan) was interesting, but his role gets cut short. I wanted to see more of his eccentric Indian billionaire helicopter pilot cowboy, but sadly it wasn't to be.

In a call out to the earlier films, B. D. Wong returns as a shifty scientist who's gone bad and sold out. He should know that's dangerous, given Newman's unpleasant fate, but greed can override common sense, particularly if it helps set up a sequel.

Bryce Dallas Howard plays Claire Dearing, the uptight park manager, who initially clashes with the laid back Owen. The frisson predictably leads in a romantic direction. Claire is a buttoned down exec type who likes life itemized on a ledger, but she soon finds herself with more than budget issues on her plate. She rises to the action occasion, which is great, but in one of the key scenes of the film, she prioritizes fashion over being practical. It's like self-preservation lost out to Manolo's.

It was an unintentionally jaw dropping moment, and not in a 'wow, those look like real dinosaurs' kind of way.

The film tries to flesh out Claire's character by throwing in her two nephews (someone and another kid), who do double duty as McGuffins that must be rescued. We get to see that Claire cares. Sort of. After a bit and mostly because we need Claire to get down into the jungle and out of the air conditioned control room, which is a boring place with lots of screens and comfortable chairs and nerds.

Claire dragoons Owen to the task, because he's Mr. Great Outdoors, and our odd couple set off across dino island to find The Lost Boys. It reminded me briefly of The African Queen for some strange reason, but Humphrey Boggart and Katharine Hepburn they are not.

Worse, Vincent D'Onofrio shows up as Hoskins, a villainous representative of the military-industrial complex angling to weaponize velociraptors. He's all sneers and scenery chewing, so obviously evil he's got a goatee. D'Onofrio does it well (he's a very good actor) but the evil plan he's been saddled with by the writers makes no sense at all. None. Zero. Nada. Honestly, it's one of the stupidest plans I've ever seen in a movie. He's going to use the raptors as weapons, you see. Just release them and hope they'll go after the deadliest predator on the island rather than the thousands of soft, yummy tourists.

I kid you not.

The 'plan' (sort like the Cylons had a plan) depends entirely on wishful thinking, as Hoskins has no means of controlling the beasts without the help of Owen, Chris Pratt's dino-whisperer. Owen is essential to the plan, but that doesn't stop Hoskins from threatening to proceed, with or without the guy.

Hoskins just has the worst people management skills. He needs to watch some HR videos.

If only Owen had said no. What would Hoskins have done but blubber and beg? He should have called Hoskin's bluff, but then, he's an action man and not the brightest bulb in the box. But he does empathize with the raptor urge to… unh unh, yeah baby. This emotional connection to our proto-terror birds, being recognized as the raptor Alpha, is key to the film's climax, in which Owen must out macho Indominus.

Fortunately, the evil, genetically engineered megaraptor, Indominus Rex, is much smarter than the bumbling, corpulent Hoskins. And most of the other humans on the island. As an effective, relatively competent villain, Indomo wrecks havoc all over the park, threatening the lives of all twenty-thousand tourists who are packed into Isla Nubar's posh resort.

Be a good time for the smarter tourists to start moving inward, towards the center of the crowd. After all, Indomo is likely to be full after the first hundred tourists or so, right? Just how many people can it and a half-dozen escaped velociraptors eat?

Although I have to mention that one poor soul is treated to the most outlandishly elongated death sequence I've ever seen, and all to no end. This sort of thing is usually reserved for the worst of the worst villains. It didn't justify anything, paid nothing back, and offered no comeuppance. It was just gleeful indulgence in the sadistic torture and killing of an utterly hapless person for the purpose of our entertainment. Hey, I'm down with that, I watch plenty of violence on screen, but this was just weird.

Which brings us to the final act. Turn off your brain before it begins, because it's utterly preposterous.

Yes, I know, we're not supposed to demand sense from a movie about an amusement park filled with genetically engineered dinosaurs. I get it. People have analyzed the costs, and the economics of such a park just wouldn't work out. It's silly to begin with. Honestly, though, my standards really aren't that high for logic. But there were just too many blackboard scratching moments that took me out of the movie.

If you engage your inner eleven year old and suspend disbelief, you'll likely enjoy this action packed summer blockbuster. But be forewarned: there are speed bumps for your brain. Script logic hiccups. If you don't turn off your noggin', you'll start asking questions and won't be able to stop.

The first movie proved you could have a smart script and dinosaurs in the same movie. The IQ of the series dropped with each outing. The first one had chaos theory and amber and DNA extraction and cleverness up the whazoo. What does this one have? Hackneyed ideas of weaponized raptors with no control mechanisms, a clunky plot, and characters so smart they run from T-Rex's wearing high heels.

They could have had electrical implants in the heads of the raptors, stimulating nerves to control their behaviour. Scientists are already doing this sort of experimentation with insects, using impulses to direct the bugs left and right. Crichton even wrote about controlling human behavior with implants in The Terminal Man. So it's not like a more sensible, logical, compelling foundation couldn't have been laid if they'd bothered. It'd be smarter, more interesting, and add another angle to the franchise.