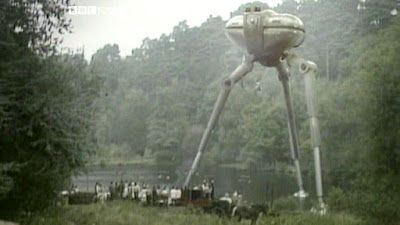 I'm not sure if anyone remembers this series now, in the age of Divergent and Hunger Games and a zillion other post-apocalyptic young adult books, but I have a soft spot for John Christopher's Tripod trilogy.

They're great fun, and the BBC adaptation from the early 80s is entertaining, if rather dated now.

It also sags a bit in the middle when they spend four episodes on – what else? – a farm. A lot of post-apocalypse fiction seem to get stuck for an inordinate amount of time on farms (I'm looking at you, Walking Dead).

Even Z for Zachariah, one of my favorite PA novels, is set on a farm. The enter book happens there, but you don't mind because it's AWESOME. And it's being made into a film which is set for release later this year. Or so I'm told.

The Tripod series follows three young boys who go on the lam to avoid being 'capped' by aliens who rule the earth in the far flung future. Capping is done when a child reaches adolescence, and it, essentially, pacifies them. 'Neuters' violent, rebellious thoughts.

Humans live in service to the three legged aliens, who prowl the earth in mighty tripods straight out of H.G. Wells, and live in great domed cities. Human society is mainly rural, and held in a pre-industrial state.

But there is a resistance movement of humans living in The White Mountains, and the first book is about the boys trying to reach this safe haven.

The second book sees them infiltrate a great city of the aliens, The City of Gold and Lead, and the third culminates in revolution against the alien order.

It's a lot of fun, although the TV show was unceremoniously killed off after season two (which covered the second book).

The books are well written with peppy, easily accessible prose that had me hooked and flipping pages as a kid.

You can watch the whole thing online. For the time, the effects were cutting edge.