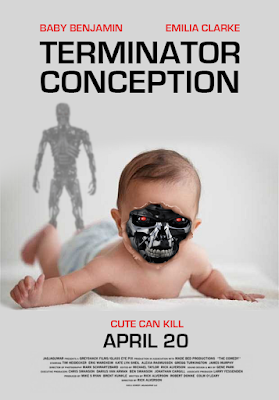 The title of the next installment of the Terminator franchise has been announced in the wake of the release of Terminator Genisy, along with a teaser poster.

Looks like this time, they're not holding anything back:

In a last ditch effort to avoid defeat, Skynet sends a T-9000 terminator back in time to 1947. Disguised as an irresistibly cute baby, the T-9000 infiltrates the maternity ward where Mary Norton, Sarah Connor's mother, was born, and only the cranky floor janitor (Danny DeVito) can save baby Mary and the world from certain destruction. Endearing baby hijinks, with explosions, homicide and burning faces, ensue.

Arnold will also appear, using CGI to 'de-age' him into baby form.