The Force Awakens: fun but no classic (SPOILERS). 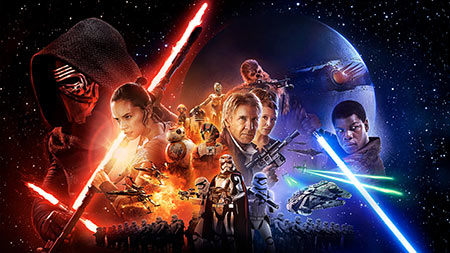 The Force Awakens is like the popcorn, pop, and candy I had during the film (I skipped lunch): Tasted great at the time, but afterward, I didn't feel so hot.

And considering how insanely fast the film was put together, we're lucky it's as good as it is.

So go see it, enjoy, and don't think about it again.

The first third of the film is great, and the new characters are even better: Rey, Fynn, BB-8 and Kylo Ren are fun, fresh, and interesting. Poe's a little flat (the script doesn't give him as much to work with), but all the actors deliver a level of craft and energy that hasn't been seen in a Star Wars film for awhile (Sadly the prequels had a cast of cardboard).

We open with a massacre and then segue into quiet mood setting that's the best part of the film. It feels like Star Wars. It builds up your faith. Then BAM: it's onto the action-sequence roller coaster. I got flashbacks of Star Trek: Into Darkness. It doesn't let up, and it's draining. JJ Abrams loves breathless pacing, but sometimes you get the impression the story's being told by a phenomenally gifted, ADD eight-year old. On the positive side, you're invested. You care about Rey and Fynn and lil' BB pretty real quick; they're very appealing and charismatic portrayals. That gives the action meaning.

The lightsaber battle at the end of Phantom is technically impressive and visually spectacular, for example, but it's empty, meaningless calories because you don't give a spit about Qi-Gong Bargain Bin, or whatever his name was. And Ewan McGregor was untouchable; there was never any fear his character was going to come to harm, and so no suspense.

The film gets faster and faster paced as it goes on, which is generally how it goes, but here it's on turbo. It's about going so blindingly fast you don't notice the flaws. Think about the scene in Star Wars where they're planning the attack on the Death Star. It feels real. Grounded. They based it on how bomber crews in the Second World War were briefed. Best of all? You knew the pilots were afraid by their questions. They were tense, which is what you'd expect them to be if they were real people instead of extras. In The Force Awakens, the planning session more resembles a bunch of ten-year olds at play. No one acts like they're about to put their lives on the line.

That was one of the brilliant things about Star Wars' lived-in universe: Little touches of the ordinary to keep the fantasy grounded and relatable. Star Wars had power converters and a whiny teenager who wanted to escape his small town. The second film had Luke at summer swamp camp and Han and Leia on the road trip from hell. The beginning of Awaken tries to ground us, too, but gravity gives way by the end for the sake of fast pacing.

Kasdan and JJ could have gone anywhere with the story. The possibilities of our galaxy far, far away are almost endless. It's a wildly imaginative storytelling playground.

Or it should be.

The biggest disappointment of the film is that it recycles large chunks of Star Wars and Empire Strikes Back.

Disney executives invested four billion in the Star Wars franchise and they want to make that money back.

Remember that Hollywood execs took 'Mars' out of the title of John Carter because other films with that unmentionable M-word in the title had bombed? They concluded that people didn't like movies with the word 'Mars' in the title.

That's how they think.

It's a bit voodoo.

That's going to inform how they approach the Star Wars: was the first film a success due to excellent story telling, or… because it had a desert planet? Probably story, but when there's this much money involved, why not hedge your bet?

And blaster fire erupts after the big moment and people scream, 'nooooo!'

It's like they took the first two films, put them in a blender, and poured out a milkshake script.

This kind of thinking results in three Death Stars blowing up over the course of four films. Honestly, when I saw Starkiller base, the first thought wasn't 'wow', or 'that's impressive'. No, my first thought was: 'Oh sh*t, not another f*cking Death Star!'

Those pesky things are more ubiquitous than cathedrals on a tour of Europe.

The reason why Empire is so good is because it didn't just scale up the ending of Star Wars; instead of zigging, it zagged and went for a powerful emotional punch at the end. To allow the emo-twist to hit harder, they pushed the big battle sequence up to the beginning of the film, letting both sequences breathe.

Here, they don't trust their storytelling enough to allow that. Instead, they mash the ending of Star Wars together with the ending of Empire. Spectacular battle scene is intercut with powerful emotional twist. The hope is that this will have double the impact, but it doesn't. They just cancel each other out. There's too much.

But the execs want to cover all the bases, and not leave anything to chance.

So they shoved in both: scaled stunts and emotional punch.

Which leads inevitably to a dead end.

The first Death Star was big. The second was five or six times bigger. The third is larger than the second by an even greater order of magnitude. What will be the fourth? The size of a sun? What comes after that?

Spielberg once said that in any sequel to Raiders of the Lost Arc, the stunts would have to be even bigger. But if the stunts in the first already push the limits of credulity, stretch the bubble of disbelief to breaking point, where are you going?

Where does it end?

I'll tell you where: farce and inadvertent self-parody.

It ends with blowing up ever-bigger Death Stars, over and over, ad infinitum.

It's Avengers I being the same blazingly quick-cut action-blur as Avengers II.

It ends with sequel after sequel that is almost indistinguishable from its predecessor. Just bigger.

It's the cinematic equivalent of changing the packaging, or letting out a suit, and calling it all-new.

That's why Empire is so good: it builds on Star Wars. It doesn't recycle. The characters grow and go new places, rather than just repeating the same journey they took the first time.

Empire is how you build a lasting franchise. Not Jedi.

And not The Force Awakens.

The hollow core of the new film bodes ill for the future. The characters are enormously appealing, but the story's messy and sloppy and full of coincidences to the point of absurdity. It's only there to provide a segue into the next action sequence.

And yet, Empire, our critically beloved darling, is the lowest earning of the whole set, adjusted for inflation. The Phantom Menace the highest.

Did JJ achieve what he needed to? You bet. He's made an entertaining film that's far better than any of the prequels. The film will make a ton of money. That's the bottom line.

Did he create a modern classic? A story that will stand the test of time? Given the constraints the film was made under, that probably was never in the cards.

In ten years, people will still be looking back to the original trilogy as the best.

• During the film I strongly felt that Rey (Ray of light!) was Luke's daughter. But there's another possibility: she's the twin sister of Kylo Ren, spirited away by Luke or Maz without Han or Leia's knowledge, or even knowing she existed (they seem to have no knowledge of a daughter, missing or otherwise). Which doesn't make much, or any, sense, because she was just dumped on Tatooine (Jakku, whatever) without a protector. Yet if Rey was Luke's daughter, surely they'd have mentioned the mother in the setup… wouldn't they? Maybe not because…

• Rey picked up her knowledge of the force, and lightsaber fighting, from Kylo Ren when he tried to probe her mind. She probed right back and gleaned knowledge of The Force. That's my guess.

• Captain Phasma was beyond lame.

•  The Starkiller Base super weapon was ridiculous.

• Why was nobody working for the First Order over thirty? Don't they trust them?